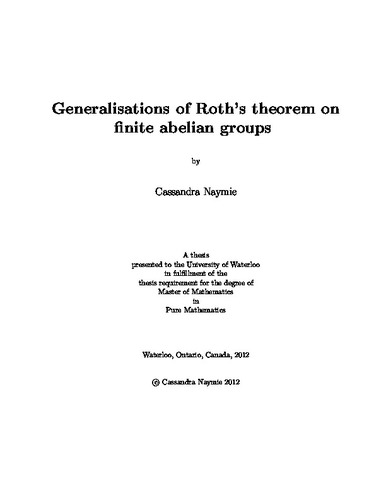 Roth's theorem, proved by Roth in 1953, states that when A is a subset of the integers [1,N] with A dense enough, A has a three term arithmetic progression (3-AP). Since then the bound originally given by Roth has been improved upon by number theorists several times. The theorem can also be generalized to finite abelian groups. In 1994 Meshulam worked on finding an upper bound for subsets containing only trivial 3-APs based on the number of components in a finite abelian group. Meshulam’s bound holds for finite abelian groups of odd order. In 2003 Lev generalised Meshulam’s result for almost all finite abelian groups. In 2009 Liu and Spencer generalised the concept of a 3-AP to a linear equation and obtained a similar bound depending on the number of components of the group. In 2011, Liu, Spencer and Zhao generalised the 3-AP to a system of linear equations. This thesis is an overview of these results.