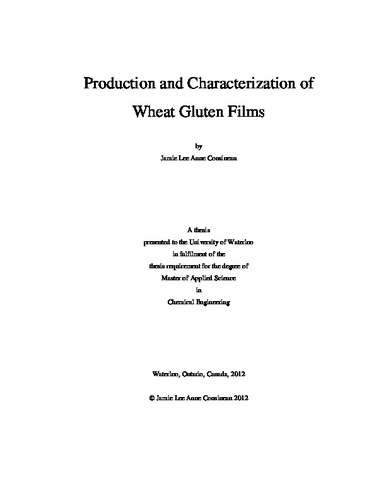 Biodegradable, edible wheat gluten films offer a renewable alternative to plastic food packaging or can be incorporated directly in the food product. Wheat gluten is a good option because it forms a fibrous network, lending strength and elasticity to films. The goal of this research project was to produce, with a water-based film formulation and methodology, smooth, homogeneous wheat gluten films with low water vapour permeability (WVP). The water-based film formulation also served to compare the FT Wonder wheat cultivar, grown in Ontario, to commercially produced wheat gluten and determine the effect of wheat source on the film properties, surface morphology, surface hydrophobicity, WVP, and film swelling in water for different pH, temperature and casting surface conditions. Fluorescence, SPR, and casting formulation viscosity provided preliminary information on the mechanism of film formation and on gluten protein structure induced by modifying the film formulation. This research provides an alternate use for some Ontario wheat cultivars based on their properties in films compared to commercial sources of gluten. As a result, using Ontario cultivars to prepare gluten film packaging material has potential as an alternate source of income for Ontario farmers. This research also defines the film properties for gluten films produced from aqueous solutions, helping to identify processing parameters that could bring gluten films on par with plastic packaging and make gluten films a viable alternative food packaging material. Finally, it was determined that the water vapour permeability of wheat gluten films was not correlated to film surface contact angle.