Dysphoria and facial emotion recognition: Examining the role of rumination 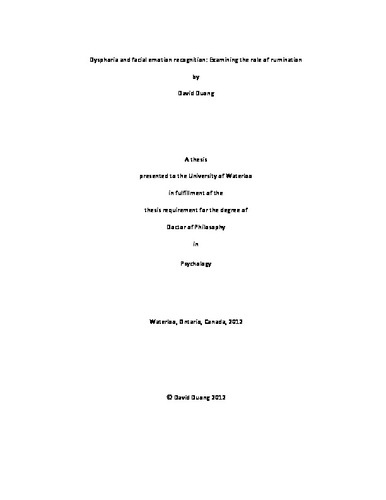 Rumination has been shown to be an influential part of the depressive experience, impacting on various cognitive processes including memory and attention. However, there is a dearth of studies examining the relationship between rumination and emotion recognition, deficits or biases in which have been closely linked to a depressive mood state. In Study 1, participants (N = 89) received either a rumination or distraction induction prior to completing three variants of an emotion recognition task assessing decoding accuracy or biases. Results demonstrated that greater levels of dysphoria were associated with poorer facial emotion recognition accuracy, but only when participants were induced to ruminate (as opposed to being induced to distract). The aim of Study 2 (N = 172) was to examine a possible mechanism, namely cognitive load, by which rumination affects emotion recognition. Results from this study indicated that participants endorsing greater levels of dysphoria were less accurate on an emotion recognition task when they received either a rumination induction or a cognitive load task compared to their counterparts who received a distraction induction. Importantly, the performance of those in the cognitive load and rumination conditions did not differ from each other. In summary, these findings suggest that the confluence of dysphoria and rumination can influence individuals’ accuracy in identifying emotional content portrayed in facial expressions. Furthermore, rumination, by definition an effortful process, might negatively impact emotion recognition via the strain it places on cognitive resources.