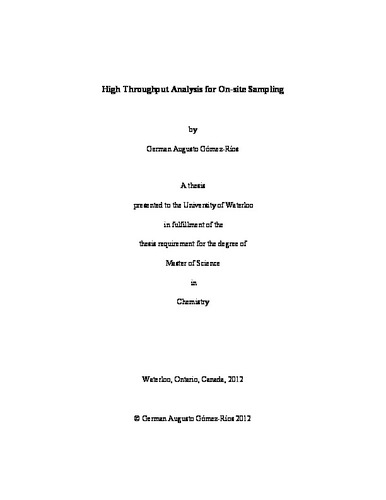 Until recently, multiple SPME fibres could not be automatically evaluated in a single sequence without manual intervention. This drawback had been a critical issue until recently, particularly during the analysis of numerous on-site samples. Recently, GERSTEL® has developed and commercialized a Multi-Fibre Exchanger (MFX) system designed to overcome this drawback. In this research, a critical evaluation of the MFX performance in terms of storage stability and long term operation is presented. It was established in the course of our research that the MFX can operate continuously and precisely for over 200 extraction/injection cycles. However, when the effect of residence time of commercial fibres on the MFX tray was evaluated, the results have shown that amongst the evaluated fibre coatings, carboxen/polydimethylsiloxane (CAR/PDMS) was the only coating capable of efficient storage on the MFX tray for up to 24 hours after field sampling without suffering significant loss of analytes. Additionally, the MFX system capability for high-throughput analysis was demonstrated by the unattended desorption of multiple fibres after on-site sampling of two different systems, indoor air and biogenic emissions. Subsequently, a protocol based on a new, fast, reproducible, reusable and completely automated method that enables quick assessment of SPME coatings was developed. The protocol consists of an innovative in-vial standard generator containing vacuum pump oil doped with McReynolds probes and subsequently mixed with a polystyrene-divinylbenzene resin. According to our results, the protocol has proven to be a useful tool for the quick assessment of inter-fibre reproducibility prior to their application in on-site analysis. The implications of such protocols include, but are not limited to: time-saving, assurance of reliable and reproducible data, and a dependable guide for novice users of the technique. Finally, an innovative, reusable and readily deployable pen-like diffusive sampler for needle traps (PDS-NT) is proposed. Results have shown that the new PDS-NT is effective for air analysis of benzene, toluene, and o-xylene (BTX). In addition, no statistically significant effects of pen geometry on the uptake of analytes were found.