The Dilemma of Proxy-Agency in Exercise: a Social-Cognitive Examination of the Balance between Reliance and Self-Regulatory Ability 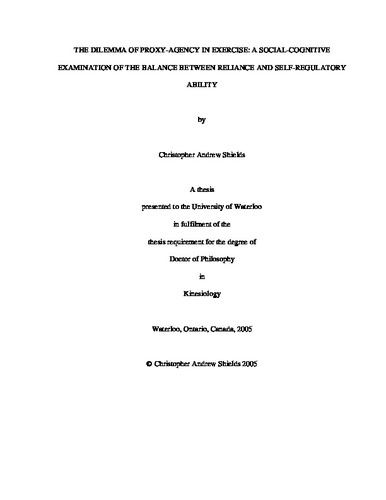 Social Cognitive Theory (SCT: Bandura, 1997) has been used successfully in understanding exercise adherence. To date, the majority of the exercise research has focused on situations of personal agency (i. e. , self as agent: e. g. , McAuley & Blissmer, 2000). However, there are a number of exercise situations in which people look to others to help them manage their exercise participation by enlisting a <i>proxy-agent</i> (Bandura, 1997). While using assistance from a proxy can promote the development of self-regulatory skills, Bandura (1997) cautions that reliance on a proxy actually reduces mastery experiences which can result in an inability to self-regulate one?s behaviour. Although research examined proxy-agency in exercise (e. g. , Bray et al. , 2001), the issue of reliance on the proxy at the expense of the participant?s ability to adjust to exercise without that agent has not been investigated. This potential dilemma of proxy-agency in exercise was at the core of this dissertation and was investigated in a series of three studies. Study 1 investigated whether those who differed in preferred level of proxy-contact also differed in their social-cognitions both within and outside a proxy-led exercise context. In addition, the relationships between proxy-efficacy, reliance and self-efficacy were examined. Results indicated that participants who preferred regular contact with an exercise proxy had lower self-regulatory efficacy, lower task efficacy, and weaker intentions in a proxy-led exercise context. Further, high-contact participants were shown to be less efficacious in dealing with the behavioural challenge of sudden class elimination. It was also demonstrated that higher reliance on the instructor was associated with lower self-efficacy and higher proxy-efficacy. Study 2 served to extend the findings of Study 1 through the examination of behavioural differences characteristic of differential levels of preferred proxy contact and the reasons for use of proxy-agency. It was found that exercise class participants preferring high contact with a proxy found exercising independently more difficult than did their low contact counterparts. It was also found that when faced with class elimination, those preferring high contact chose a self-managed activity alternative less frequently than did those preferring low contact. High contact participants also reported feeling less confident, less satisfied and perceived their alternative activity as more difficult than did those preferring low contact. In examining the reasons for preferring high proxy-contact, results indicated that a preference for high contact was associated with having had less experience exercising independently and allotting more responsibility for in-class participation to the class instructor as compared to preferring low proxy-contact. Study 3 used Lent and Lopez?s (2002) tripartite model of efficacy beliefs to examine the associations between relational efficacies (i. e. , other-efficacy and relation inferred self-efficacy (RISE) beliefs, proxy-efficacy) and various social cognitions relevant to proxy-agency. Results revealed that relational efficacies were distinct yet related constructs which additively predicted self-regulatory efficacy, satisfaction, intended intensity and reliance. Relational efficacies were also shown to make unique contributions to the predictions of the relevant social-cognitions. It was also demonstrated that RISE beliefs were associated with the attributions participants made. Specifically, higher RISE beliefs was associated with making more internal, personally controllable and stable attributions. These results represent the initial examination of relational efficacy beliefs in the exercise literature and provide additional evidence of the proxy-agency dilemma in exercise. Taken together, the present series of studies both support theorizing by Bandura on the dilemma of proxy-agency and represent an extension of the existing literature of proxy-agency in exercise. Results suggest that seemingly healthy, regularly exercising adults who choose to employ proxy-agency may be at risk for nonadherence in situations of behavioural challenge. The current findings have important implications for exercise leaders and interventionists as they must be aware of the balance between helping and hindering.

Christopher Andrew Shields (2005). The Dilemma of Proxy-Agency in Exercise: a Social-Cognitive Examination of the Balance between Reliance and Self-Regulatory Ability. UWSpace. http://hdl.handle.net/10012/715