Investigations on the Reptilian Spectacle 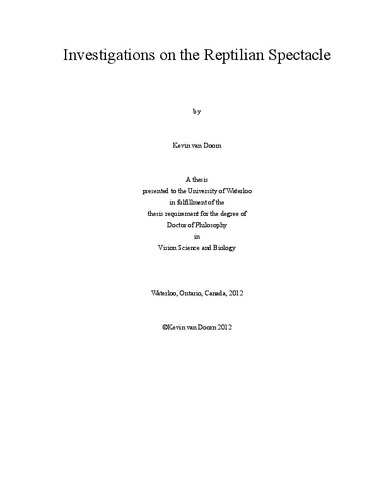 The eyes of snakes and most geckos, as well as a number of other disparate squamate taxa, are shielded beneath a layer of transparent integument referred to as the “reptilian spectacle.” Derived from the embryonic fusion of palpebral tissues, the spectacle contains a number of specializations of the skin to benefit vision while still allowing it to function as the primary barrier to the environment. For example, in nearly all species that possess it, it is markedly thinned compared to the surrounding integument and its keratinized scale is optically transparent. While the spectacle may thus seem ideally adapted to vision in allowing the eyes to be always unoccluded, it does have a few drawbacks. One such drawback is its vascularity, the implications of which are still not fully understood, but are explored herein. As no recent synthesis exists of the body of knowledge on reptilian spectacles, the first chapter of this thesis consists of a review of spectacle anatomy, physiology, adaptive significance and evolution to help put into context the following chapters that present original research. The second chapter describes the dynamics of blood flow through the spectacle vasculature of colubrid snakes, demonstrating three main points: (1) that the spectacle vasculature exhibits cycles of regular dilation and constriction, (2) that the visual perception of a threat induces vasoconstriction of its vessels, and (3) that spectacle vessels remain dilated throughout the renewal phase. The implications of these points are discussed. The third chapter describes the spectral transmittance of the shed spectacle scale, the only keratinized structure in the animal kingdom to contribute to the dioptric apparatus of the eye, as well as its thickness. Spectacle scale transmittance and thickness was found to differ dramatically between snakes and geckos and found in snakes to vary between families. The adaptive significance of the observed variation is discussed. The fourth chapter describes biochemical analyses of the shed spectacle scales of snakes and geckos and compares their composition to other scales in the integument. Spectacle scales were found to differ significantly from other scales in their keratin composition, and gecko spectacle scales in particular were found to lack ß keratin, that hard corneous protein thought to be common to all reptile scales. The concluding chapter will discuss where this research has brought the state of our knowledge on the spectacle and offers thoughts on potentially useful avenues for further research.