State of Diversity of Uses and Activities in the Public Space: The Case of Four Public Spaces in Downtown Vancouver 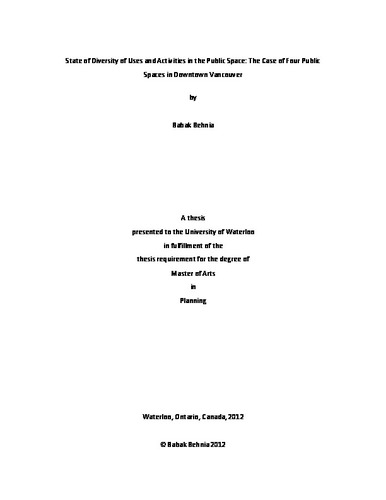 The roles of urban public spaces in urban cores are being re-assessed across many North American cities. Public spaces within downtown cores are essential in ensuring the long- term viability of such urban centers economically and socially. Public spaces have been researched by utilizing a number of theories and frameworks in the past few decades, most notably through a socio-cultural lens. Another possible method of assessing what makes a great public space in a downtown core is by looking at how diverse a range of activities and uses it provides. The City of Vancouver’s downtown core has undergone massive redevelopment schemes in the past two decades. The downtown area has been transformed into a hub that not only retains major commercial and retail functions in the City but also boasting an active and increasing residential population living in mixed-use high density condominiums. Downtown Vancouver’s public spaces have also been increasing in number during the past two decades, on par with promoting a more active outdoor lifestyle for both residents and visitors. Assessing the degree to which the range of uses and activities meet the diverse range of users’ expectations and requirements is a possible method of analyzing these spaces’ viability in the public realm. Data for this research was collected by reviewing previous literature, unobtrusive observation and mapping of activities, compiling contextual maps of surrounding areas and usage maps for each selected public space, administering on-site user surveys, and conducting semi-structured interviews with professional and academic actors involved with planning, maintaining, and designing public spaces. Through conducting this research, it was found out that while some public spaces in Downtown Vancouver are more successful in terms of being used in a variety of ways, others are less so. Downtown Vancouver was also found to be lacking central public spaces such as plazas and squares, as these spaces would provide for a wider range of activities in the public realm. A number of strategies need to be taken by planners, officials in the City, and other actors in order to ensure more diverse range of activities in Downtown Vancouver’s public spaces in the future.

Babak Behnia (2012). State of Diversity of Uses and Activities in the Public Space: The Case of Four Public Spaces in Downtown Vancouver. UWSpace. http://hdl.handle.net/10012/7145