Understanding Pro-Environmental Behaviour as Process: Assessing the Importance of Program Structure and Advice-Giving in a Residential Home Energy Evaluation Program 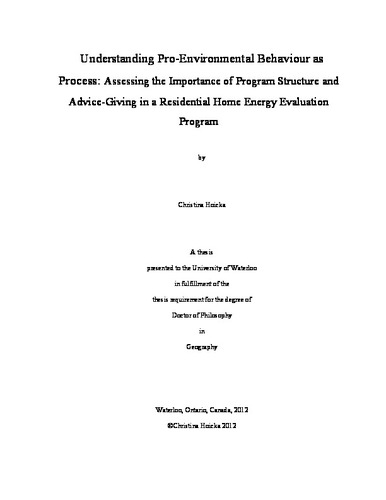 Despite recognition that reductions in fossil-fuel usage are necessary to reduce environmental harm, energy consumption continues to rise globally. There is a growing need to understand how to effectively influence individuals to reduce their energy consumption, particularly of fossil-fuels. Pro-environmental behaviour is the subset of consumer behaviour that is oriented towards reducing environmental impact compared to other options. It is widely agreed that due to a multiplicity of influencers, pro-environmental behaviour is best analysed using an integrated approach that allows the inclusion of different disciplinary perspectives, and seeks to identify the most important influences in the system under study. This dissertation sought to address the broader challenge of how to better design programs and policies that result in behaviour that is more sustainable. The objective of this dissertation was to assess the importance and effects of program structure and advice-giving on the pro-environmental behaviour of participating in a home energy evaluation program that encouraged homeowners to implement energy efficiency retrofits. Program structure was defined as the combination of the price of the evaluation, the financial reward structure, the level of government support, and the focus on influencing eight specific decisions within a specified timeframe. Advice-giving occurred during the initial evaluation with a home energy advisor and with the delivery of the report that contained a set of recommendations. A convergent mixed methods research design was employed to assess the relative importance of the two factors on participation and advice-following, where advice-following was considered as the matching of decisions to recommendations. The quantitative dataset was made up of files that detailed the 13,429 initial and the 6,123 follow-up evaluations conducted by advisors of the Residential Energy Efficiency Project (REEP) in the Region of Waterloo between 1999 and 2011. The qualitative data were gathered through 12 interviews with home energy advisors, eight of whom had worked for REEP and had conducted more than half of the home energy evaluations contained in the quantitative dataset. A natural quasi-experimental intervention that measured self-selection in response to varying program structure was employed to examine for variations in participation, material characteristics of houses, recommendations, and advice-following. To extend our understanding of the process of participation and decision making patterns, other analyses focused on relationships between the number of recommendations, the time between initial and follow-up evaluations, the number and types of decisions made, and the prioritization of decisions. The interviews assessed for differences in styles of advice-giving, and for their impact through comparison with the quantitative data that detailed the recommendations and decisions taken by the homeowners. The results of the effects of both factors were interpreted jointly and compared to previous studies about REEP or the EnerGuide for Houses and program as it was delivered nationally. This dissertation confirmed that an integrated approach to examining pro-environmental behaviour is supported as a useful framework for analysis. The findings support a process-based definition of pro-environmental behaviour as a useful model and form of integration. A convergent mixed methods research design is supported as a valuable and rigorous approach to examine the impact of various influences simultaneously. The delineation of multiple stages in the decision making process greatly enhanced the quality of analyses and findings. The two main factors of program structure and advice-giving affected advice-following. One factor influenced the other, as the program structure affected the receptiveness of homeowners as perceived by advisors, which affected advice-giving. The findings support the importance of both behaviourist and social learning approaches in influencing pro-environmental behaviour, and that their importance varies depending on the stage of the decision process. The findings show that behaviourist interventions, such as the program structure, were associated with variations in participation, and that different subsets of the population of houses from the Region of Waterloo were attracted to the different program structures. Indeed, in each program structure, the decision to return was influenced by different decisions. A critical finding of this study was that these programs were not sufficient to alter the path dependence of energy consumption or of energy systems as the program participants usually did not implement the most effective retrofits, and if they did, the retrofits did not achieve adequate depth of reductions to energy consumption in a timely manner. According to the home energy advisors, many homeowners had pre-conceived ideas upon entering the program of replacing their heating systems and windows. The interpretation of the qualitative and quantitative data showed that these intentions were often not altered, particularly in the case of windows, the decision that advisors believed to be the least effective of energy decisions.