A mechanistic model of motion processing in the early visual system 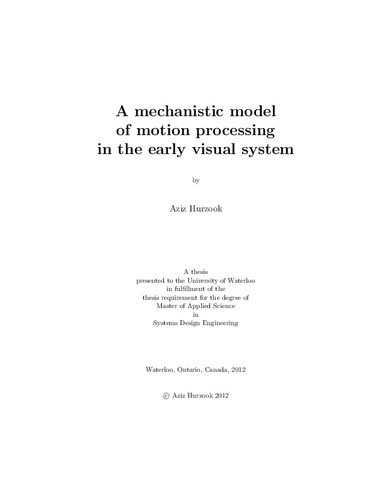 A prerequisite for the perception of motion in primates is the transformation of varying intensities of light on the retina into an estimation of position, direction and speed of coherent objects. The neuro-computational mechanisms relevant for object feature encoding have been thoroughly explored, with many neurally plausible models able to represent static visual scenes. However, motion estimation requires the comparison of successive scenes through time. Precisely how the necessary neural dynamics arise and how other related neural system components interoperate have yet to be shown in a large-scale, biologically realistic simulation. The proposed model simulates a spiking neural network computation for representing object velocities in cortical areas V1 and middle temporal area (MT). The essential neural dynamics, hypothesized to reside in networks of V1 simple cells, are implemented through recurrent population connections that generate oscillating spatiotemporal tunings. These oscillators produce a resonance response when stimuli move in an appropriate manner in their receptive fields. The simulation shows close agreement between the predicted and actual impulse responses from V1 simple cells using an ideal stimulus. By integrating the activities of like V1 simple cells over space, a local measure of visual pattern velocity can be produced. This measure is also the linear weight of an associated velocity in a retinotopic map of optical flow. As a demonstration, the classic motion stimuli of drifting sinusoidal gratings and variably coherent dots are used as test stimuli and optical flow maps are generated. Vector field representations of this structure may serve as inputs for perception and decision making processes in later brain areas.