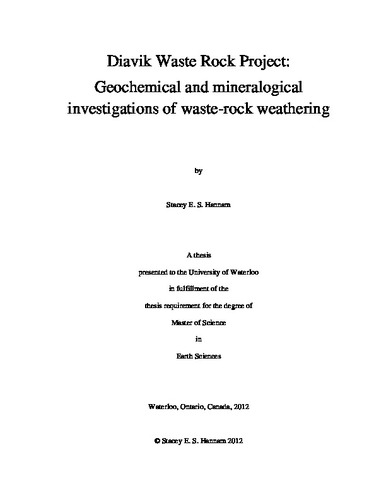 The oxidation of sulfide minerals in mine waste rock has the potential to generate acidity and contribute sulfate, metals and other trace constituents to drainage. The rate and extent to which this process occurs are dependent upon climactic conditions and the overall hydrologic, geochemical and physical properties of the waste rock. A laboratory and field-based study is currently being conducted at the Diavik Diamond Mine in the Northwest Territories, Canada, which is investigating the evolution of waste rock exposed to subaerial conditions in the continuous permafrost region. Over the course of the mine life, Diavik is expected to generate a stock pile up to 120 Mt of low-sulfide waste-rock composed primarily of granite and granite pegmatite with smaller amounts of biotite schist which occurs as xenoliths, and trace contributions from diabase dykes. Waste rock is segregated based on sulfur content into Type I (< 0.04 wt % S), Type II (0.04-0.08 wt % S) and Type III (> 0.08 wt % S) rock. The Diavik Waste Rock Research Project includes four 2 m by 2 m lysimeter experiments, two each constructed with Type I and Type III waste rock. Also constructed were two well-instrumented, 15 m high test scale waste-rock piles, one composed of Type I and one composed of Type III uncovered waste rock, and one covered test pile based on a reclamation concept which consists of a Type III waste rock core, a 1.5 m glacial till layer, and a 3 m layer of Type I waste rock. In addition, instrumentation was installed in four locations of the operational waste-rock stockpile. The geochemical differences between the Type I and Type III lysimeters and test piles is discussed to compare the non-acid generating Type I waste rock with the potentially acid-generating Type III. The effluent from the Covered test pile retained the character of the Type III waste-rock core over the course of observation producing slightly acidic drainage, possibly due to a zone of unfrozen till on the crest as a result of heat trace within the test pile. Observations from the geochemistry of the Type III waste rock will also be compared to mineralogical analysis from Type III samples collected during installation of instruments in the full scale waste-rock stockpile. Due to the low concentration of sulfide minerals, advanced techniques such as SEM and synchrotron-based analyses were employed for in-depth characterization of initial sulfide-oxidation products. SEM images and elemental mapping reveal development of reaction rims on many pyrrhotite grains, but lower instances of weathering of pyrite. Distinct zonation of weathering trends between depths within the stockpile was also absent. These observations indicate that the waste rock is in the early weathering stages may not yet be affected by the formation of permafrost. These observations act as a baseline for future studies. Correlations between the mineralogical and geochemical analyses, in addition to future monitoring and continuation of these studies, will assist in understanding the evolution of waste rock stored in a permafrost environment.