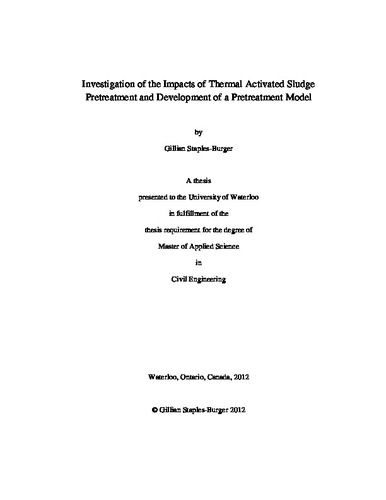 Waste activated sludge (WAS) pretreatment technologies are typically evaluated in terms of the associated improvement in biogas and sludge production during digestion and post-digestion dewaterability. However, WAS properties, and hence the impact of pretreatment on WAS properties, are dependent upon the raw wastewater composition and configuration of the wastewater treatment plant (WWTP). A generally accepted means of characterizing and comparing all pretreatment processes does not exist. The motivation for this project was to evaluate the impact of pretreatment on WAS properties in terms of changes in COD fractionation. The first objective of this study was to fractionate the COD of the WAS before and after pretreatment to show how pretreatment may increase the rate and extent of aerobic digestion. The second objective was to develop a COD-based stoichiometric pretreatment model that may be integrated into WWTP simulations. A bench-scale biological reactor (BR) with a solids retention time (SRT) of 5 days was started up with WAS from the Waterloo WWTP. The BR was fed daily with a completely biodegradable synthetic substrate so that the BR WAS contained only biomass and decay products after 3 SRTs of operation. In the first phase of the study, an aerobic digester (AD) with a SRT of 10 d was fed daily with BR WAS. The BR-AD system was operated at steady state for one month. A range of physical and biochemical properties were regularly measured in each process stream. Offline respirometric tests were regularly conducted to determine the aerobic degradability and fractionate the COD of the BR and AD WAS. The oxygen uptake rate (OUR) associated with the daily addition of BR WAS to the AD was determined as an additional measurement of the aerobic degradability of the BR WAS. In the second phase of the study, the BR WAS was pretreated prior to being fed daily to the AD. High pressure thermal hydrolysis (HPTH) pretreatment was selected for this project since it is one of the most popular and promising pretreatment techniques. A sealed volume of BR WAS was heated to 150°C at 3 bars for 30 minutes. The same physical, biochemical and biological tests used to characterize the process streams in Phase 1 were employed to characterize those in Phase 2. The Phase 2 system was operated for two months at steady-state. The results of several independent tests showed that the COD of the BR WAS was comprised of storage products (XSTO) in addition to active heterotrophs (Zbh) and decay products (Ze). However, it was shown that the AD WAS only contained Zbh and Ze as XSTO was depleted in the AD. HPTH pretreatment did not reduce the TCOD concentration of the WAS however it did solubilize 56 ± 7% of COD, 49% ± 11% of organic nitrogen, 56 ± 10% of VSS and did not solubilize ISS. Furthermore, pretreatment did not generate soluble non-biodegradable COD. These findings were consistent with prior research on HPTH WAS pretreatment. Pretreatment increased the rate at which the BR WAS was aerobically degraded. The offline respirometric tests showed that the pretreated BR WAS contained a substantial amount of readily biodegradable COD (Sbsc). However, pretreatment did not increase the extent of biodegradation. The results of several independent tests showed that the non-biodegradable COD component of the BR WAS, i.e. Ze, was not converted to biodegradable COD by pretreatment. A COD-based stoichiometric pretreatment model was developed for the dose of HPTH pretreatment employed in this study. When this model was integrated into BioWin®, it was able to accurately simulate both the steady state performance of the overall system employed in this study as well as dynamic respirometry results. The experimental results showed that the TCOD of the BR WAS consisted of 51% Zbh, 12% Ze and 37% XSTO and the pretreated BR WAS consisted of 12% Ze and a negligible amount of Zbh. The pretreatment model verified these fractions and predicted that the pretreated BR WAS also contained 54% Sbsc and 32% slowly biodegradable COD (Xsp). The approach described in this study may be followed to determine the impacts of pretreatment on Zbh, Ze and XSTO when other doses of HPTH pretreatment and other pretreatment techniques are employed.

Gillian Staples-Burger (2012). Investigation of the Impacts of Thermal Activated Sludge Pretreatment and Development of a Pretreatment Model. UWSpace. http://hdl.handle.net/10012/7136