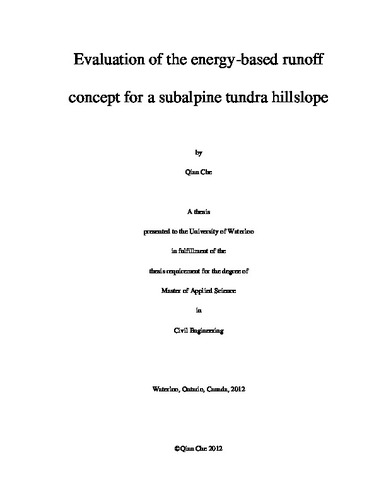 A major challenge to cold regions hydrology and northern water resources management lies in predicting runoff dynamically in the context of warming-induced changes to the rates and patterns of ground thaw and drainage. Meeting this challenge requires new knowledge of the mechanisms and rates of ground thaw and their implications to water drainage and storage patterns and processes. The study carries out to evaluate the concept of energy-based runoff in the perspective of ground heat flux, soil thaw and liquid moisture content, tortuosity of snow-free area, preferential flow and discharge of the hillslope. Based on field measurements, coupled energy and water flow is simulated in the Area of Interest (AOI) with a half-hour time interval by the distributed hydrological model, GEOtop. In the field, the saturated hydraulic conductivity varies exponentially between the superficial organic layer and the underlying mineral layer. In the simulation, the parameters of the soil physical properties are input by fourteen uneven layers below the ground surface. Starting from the initially frozen state, the process of soil thaw is simulated with dynamic variables such as soil liquid moisture and ice content, hydraulic conductivity, thermal conductivity and heat capacity. The simulated frost table depths are validated by 44-point measurements and the simulation of point soil temperature is also compared to data measured in an excavated soil pit. As a result, the frost table topography is dominated by both the snow-free pattern and the energy fluxes on the ground surface. The rate and magnitude of runoff derived from snow drift and the ice content of frozen soil is greatly influenced by the frost table topography. According to the simulation, the frost table depth is closely regressed with the ground surface temperature by a power function. As soil thawing progresses, ground heat flux reduces gradually and the rate of soil thaw becomes small when the frost table descends. Along with the snow-free area expanding, the average soil moisture of the AOI increases prior to that time when the average frost table is less than 25 cm deep. The snow-free patches expand heterogeneously in the AOI, which causes the spatial and temporal variation of hydraulic conductivity due to the non-uniform frost table depth. According to the simulation, the transit time of the flow through the AOI decreases to the shortest span on May 13 with the average frost table of 10 cm. Before this date, the time lag between snowmelt percolation and slope runoff is about 8-10 hours; while after this date, the time lag is no more than 5 hours. The pattern of the preferential flow in the AOI highly depends on the frost table topography. When the snow-free patches are widely scattered and the average frost table is between 0 and 10 cm, the preferential flow paths are inhibited. With soil thaw progresses, the preferential flow paths are prominent with the largest single contributing area occurring when the average frost table is between 10 cm to 15 cm. When the average frost table reaches 25 cm, the importance of preferential flow is not apparent, and matrix flow prevails.