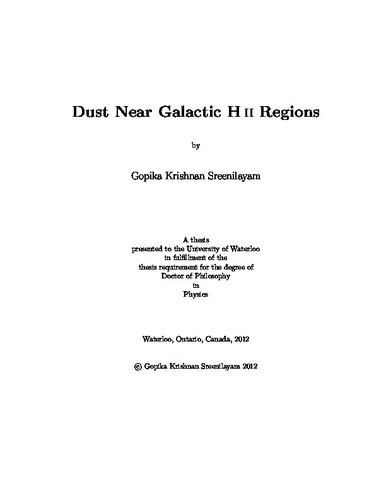 The distributions of physical properties, such as the temperature, mass, or density of the dust grains in molecular clouds near Galactic massive star forming regions are relatively poorly understood. These properties are significant in characterizing the early stages of high-mass star formation. The major goal of this thesis is to study the dust properties using continuum emission to learn about the effect on the dust of the extreme environments around high-mass star formation. For this we estimate mass, temperature and luminosity of the hot (≥ 100 K), cool (20-40 K) and cold (≤ 20 K) dust in the environs of Galactic HⅡ regions using Infrared Astronomy Satellite (IRAS) and James Clerk Maxwell (JCMT) Submillimeter Common User Bolometer Arrays (SCUBA & SCUBA-2) data.  A total of 83 clouds has been examined using IRAS data. A two-component model Spectral Energy Distribution (SED) of hot and cool dust is used to fit the IRAS data. A three-component model SED is fitted to combined SCUBA and IRAS data for 15 clouds near HⅡ regions to measure the cold dust component. Surprisingly, the ratio of the bolometric luminosity of the cool dust to the hot dust appears to have the same value 2.8 in virtually all objects. The cool dust has typically four to five orders of magnitude greater mass than the hot dust. However, the mass in cold dust is much greater than the mass in cool and hot dust. These results may prove useful for using IR observations for estimating gas masses in extragalactic systems with active high-mass star formation.   The clouds in the environments of HⅡ regions are modelled assuming a thermal equilibrium in large grains, ignoring small grains and polycyclic aromatic hydrocarbons (PAHs). A number of different models having varying density distributions and external stellar radiation are compared to the IRAS SEDs. The model results suggest that the assumptions are not valid. We need a larger amount of dust at 30 K than the models produced and in this thesis we propose a solution to this problem, which we have not yet tested.   The JCMT Submillimeter Common User Bolometer Array-2 (SCUBA-2) data of six complexes is used to analyze the cold dust near Galactic HⅡ regions. Dust physical property maps such as the temperature, optical depth, column density and visual extinction are constructed from the SCUBA-2 data at 450 and 850 μm wavelengths. All of the molecular cloud cores are found to be at very low temperatures, down to 6 K at the centres, with increasing values toward the periphery. This is surprising because we expected some internal heating at the centre. The column densities at the centres of the clouds exceed 10²³ cm⁻² and the derived peak visual extinction values of most of the cloud cores are above 100, indicating a highly opaque cloud centre. The observed clouds are massive with gas masses ranging from 10² to over 10⁴ M⊙. All of these properties together suggest that the cores are high-mass starless cores (HMSCs), which are not hosting any massive stars at the centre. Note that there are only a few such observations, on these potential precursors of high-mass proto-stellar objects, by others. From the derived physical properties such as high column densities, high visual extinction and the cold temperatures toward the centres of the cores, we speculate that the all the sample cores are in a state of collapse. Note that the Jeans masses of the clouds are much less than their real cloud masses and the free fall times range from 10³ to 10⁴ years, confirming the potential state of the cores.