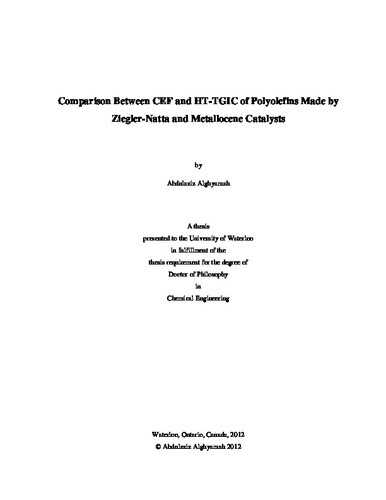 Polyolefins are the most important commodity polymers today. Their end use properties polymers depend primarily on their molecular weight (MWD) and chemical composition (CCD) distributions. Several characterization techniques are used to analyze the microstructures of the polyolefins. High-temperature gel permeation chromatography (GPC) is the most widely used technique for MWD determination. Temperature rising elution fractionation (TREF) and crystallization analysis fractionation (CRYSTAF) are routinely used for CCD measurement. There have been significant improvements over the last few years on CCD characterization techniques for polyolefins with the introduction of crystallization elution fractionation (CEF) and high-temperature thermal gradient interaction chromatography (HT-TGIC). The main objective of this thesis was to conduct systematic studies on HT-TGIC and CEF to provide a better understanding on the separation mechanism of these new techniques and to find out operational conditions that enhance the resolution of the measured CCDs. The effects of cooling rate, adsorption/desorption temperature range, heating rate and sample size on HT-TGIC fractionation were investigated using polyethylene and ethylene/1-octene copolymers made with metallocene catalyst. It was found out that HT-TGIC was relatively insensitive to the cooling rate within the range investigated in this study. However, the obtained profiles depended strongly on the heating rate applied during the desorption cycle. Chromatograms measured under faster heating rates were broader and had lower resolutions, supposedly due to co-desorption effects. Analysis of polyolefin blends by HT-TGIC showed that sample volume was a very important parameter affecting peak separation of the blend components; reducing the volume of the injected sample can be used to minimize the degree of co-adsorption and co-desorption effects. The effect of solvent type on HT-TGIC analysis was investigated using o-dichlorobenzene (ODCB), 1,2,4-trichlorobenzene (TCB), and chloronaphthalene (CN). Polyolefin blends were analyzed using these solvents and the best resolution was obtained iv when ODCB was used as the mobile phase. The profiles obtained using TCB and CN were similar and both were strongly affected by the co-adsorption and co-desorption phenomena. HT-TGIC profiles of ethylene homopolymers and ethylene/1-octene copolymers were also compared with the equivalent CEF profiles. Interestingly, it was found out that the differences between the profiles measured by these techniques decreased as the comonomer content increased, with CEF systematically measuring sharper profiles for samples with low 1-olefin comonomer content. A new method was also developed to quantify the degree of co-crystallization of polyolefin blends analyzed by CEF and was used to quantify operating conditions that influenced co-crystallization. The results showed that co-crystallization can be minimized using slower cooling rates, but heating rates play a less important role. A detailed study on the effect of CEF operating conditions on CCD resolution was also conducted using industrial LLDPE resins that have broad MWDs and CCDs. Cooling rate and solvent flow rate during the cooling cycle significantly affect the degree of co-crystallization of CEF profiles. However, varying the heating rate does not have a marked impact on these separations. The CEF profiles of these resins were compared with the equivalent HT-TGIC profiles, showing that CEF provided better peak separation than HT-TGIC. Finally, a new mathematical model was developed to simultaneously deconvolute the MWD and CCD of polyolefins made with multiple site-type catalysts such as Ziegler-Natta catalysts. The model was applied to several industrial linear low-density polyethylene (LLDPE) resins to estimate the minimum number of active site types, the number average molecular weight, the average comonomer mole fraction, and the mass fraction of soluble and non-soluble polymer made on each site type.

Abdulaziz Alghyamah (2012). Comparison Between CEF and HT-TGIC of Polyolefins Made by Ziegler-Natta and Metallocene Catalysts. UWSpace. http://hdl.handle.net/10012/7130