An investigation of interocular suppression with a global motion task 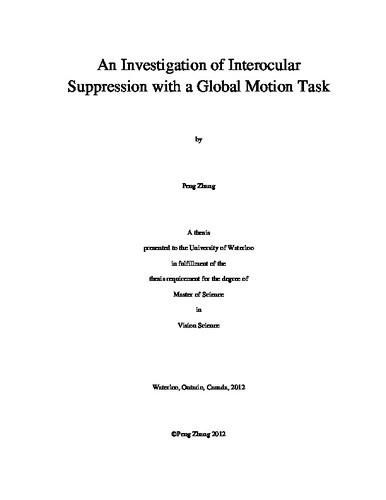 Abstract Purpose: Interocular inhibitory interactions appear to underlie the establishment of ocular dominance. The inhibitory effect leads to suppression of the non dominant eye in certain conditions. While these processes are not fully understood, the relative differences in image contrast appear to be fundamental. By titrating the relative contrast presented to each eye, a balance in the relative inhibitory effects of each eye can be defined. This research looked at whether the interocular contrast ratio at perceptual balance could be used as an index of the ocular dominance in binocular normal population, and the suppression typically found in the amblyopic population. Contrast variation was compared to luminance variation as well as the application of neutral density filters. Methods: Balance point measures were obtained by varying the interocular levels of contrast for a global motion task viewed dichoptically. One eye received signal dots moving in a given direction while the other eye received noise dots moving randomly. Subjects were tasked with determining the direction of movement of the signal dots. Balanced dichoptic motion sensitivity was achieved under a specific contrast ratio (or the balance point), depending on the observer’s binocular functions. This test was conducted on a control group (n=23) having normal vision and a strabismic amblyopic group (n=10). In addition, a variation of this test was designed with interocular luminance (rather than interocular contrast) serving as the independent variable was conducted to both the control (n=5) and amblyopic groups (n=8). Concurrent eye tracking measures measured changes in eye alignment at the balance point. Results: Although most normal vision subjects showed a balance point at close to equal levels of contrast between the eyes, a minority of them were significantly imbalanced. The suppression measured in the strabismic amblyopic group was significantly greater than that of the control group. Varying the interocular luminance instead of contrast failed to affect the coherence motion thresholds. Ocular alignment was not changed when the balance point was reached. Conclusion: Consistent with the current model of binocular integration, interocular contrast are uniquely important in establishing sensory dominance and suppression. This suggests that the interocular suppression found in amblyopia could be attenuated by methods that allow the reduction of contrast to the fellow fixing eye. Amblyopia therapy might then be improved where such contrast balancing methods are employed instead of the complete patching of the fellow eye.