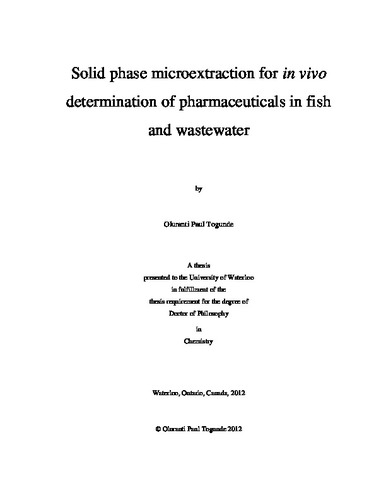 This thesis describes the development and application of solid phase microextraction (SPME) as a sample preparation technique for in vivo determination of pharmaceutical residues in fish tissue and wastewater. The occurrence, distribution and fate of pharmaceuticals in the environment are a subject of concern across the globe due to the impact they may have on human life and aquatic organisms. To address this challenge from an analytical perspective, a simplified and reliable analytical methodology is required to investigate and determine the concentration (bioconcentration factors) of trace pharmaceutical residue in fish tissue and environmental water samples (exposure). An improved SPME method, coupled with liquid chromatography with tandem mass spectrometry has been developed and applied to both controlled laboratory and field-caged fish exposed to wastewater effluent for quantitative determination of pharmaceutical residue in fish specific tissue. A new SPME configuration based on C18 thin film (blade) was developed and optimized to improve SPME sensitivity for in vivo determinations of trace pharmaceuticals in live fish. The C18 thin film extraction phase successfully quantified bioconcentrated fluoxetine, venlafaxine, sertraline, paroxetine, and carbamazapine in the dorsal-epaxial muscle of living fish at concentrations ranging from 1.7 to 259 ng/g. The reproducibility of the method in spiked fish muscle was 9-18% RSD with limits of detection and quantification ranging from 0.08 - 0.21 ng/g and 0.09 - 0.64 ng/g (respectively) for the analytes examined. Fish were sampled by in vivo SPME for 30 min to detect pharmaceutical uptake and bioconcentration, with experimental extracts analyzed using liquid chromatography coupled with tandem mass spectrometry. In addition, a simplified analytical methodology based on SPME was developed and optimized for determination and bioconcentration factor of different classes of pharmaceuticals residues in fish bile. The reproducibility of the method in spiked fish Rainbow Trout bile was 3-7% RSD with limits of detection (LOD) ranging from 0.3 – 1.4 ng/mL for the analytes examined. The field application of SPME sampling was further demonstrated in Fathead Minnow (Pimephales promelas), a small-bodied fish caged upstream and downstream of a local wastewater treatment plant where fluoxetine, atorvastatin, and sertraline were detected in fish bile at the downstream location. Also, a simple automated analytical method using high throughput robotic system was developed for the simultaneous extraction of pharmaceutical compounds detected in surface waters. The proposed method successfully determined concentrations of carbamazepine, fluoxetine, sertraline, and paroxetine in treated effluent at concentrations ranging from 240 - 3820 ng/L with a method detection limit of 2-13 ng/L, and a relative standard deviation of less than 16%. Application of the method was demonstrated using wastewater from pilot-scale municipal treatment plants and environmental water samples from wastewater-dominated reaches of the Grand River (Waterloo, ON). Finally, 4 and 8-d laboratory exposures were carried out with Rainbow Trout exposed to wastewater effluent collected from pilot scale at Burlington, ON. Additionally, wild fish, White Sucker (Catostomus commersonii) were collected and sampled from Waterloo and Kitchener downstreams containing local municipal effluent. Bioconcentration factors of the selected compounds were determined in both fish muscle and bile samples. The results show that anti-depressant drugs such fluoxetine, sertraline and paroxetine were uptake in the fish muscle and fish bile for both laboratory and field exposure. In summary, exposure of fish to micro-pollutants such as pharmaceuticals may be monitored through the analysis of bile, particularly at low concentration exposure of pharmaceuticals, where the sensitivity of analytical method may be challenged. SPME is a promising simple analytical tool which can potentially be used for monitoring of pharmaceuticals in fish tissue and wastewater.