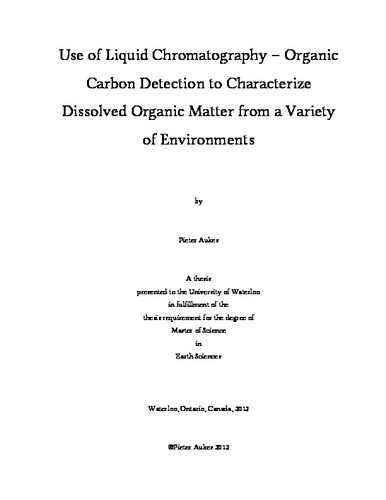 Dissolved organic matter (DOM) is a heterogeneous mixture of organic compounds comprised mostly of carbon, oxygen, nitrogen, and hydrogen, but is often operationally defined as the concentration of dissolved organic carbon that passes through a 0.45 μm filter. Derived from the degradation of both plant and animal organic matter, DOM can act as an important redox constituent within groundwater, or form carcinogenic disinfection-by-products during water treatment. It is important to understand the quality of DOM in order to be able to understand how it will react within its environment. A number of different techniques are used to characterize DOM (such as resin fractionation, ultraviolet and visible light absorption, and fluorescence) but these techniques can be both laborious and time consuming, in addition to requiring large amounts of sample. Recently, a new technique has been developed, Liquid Chromatography – Organic Carbon Detection (LC-OCD), that provides a fast and reproducible technique. LC-OCD can group components of DOM into six categories based upon molecular weight: hydrophobics (HPho), humic substances (HS), building blocks (BB), low molecular weight neutrals (LMW-N), and acids (LMW-A). Furthermore, the molecular weight and aromaticity of HS can be determined. The primary goal of this thesis was to use the LC-OCD to better understand characteristics of DOM, with special attention to how the quality of DOM can be defined.