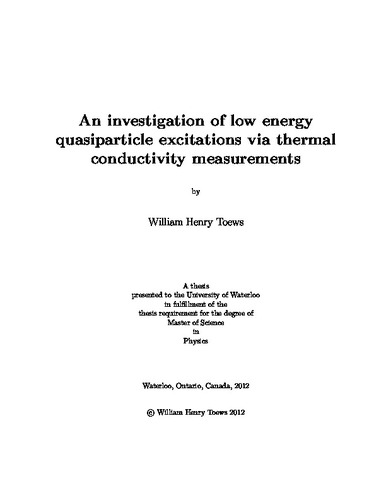 Thermal conductivity measurements are made on a variety of systems in order to probe low energy quasiparticle excitations. In particular, thermal conductivity measurements were made on the iron based superconducting material LaFePO at temperatures from 60 mK to 1 K and in fields from 0 T to 5 T in order to shed light on the symmetry of the superconducting order parameter. A substantial non-zero electronic contribution to the thermal conductivity is observed and interpreted as sub-gap electronic quasiparticles which is clear evidence for a nodal gap symmetry. A high scattering rate and non-T3 temperature dependence of the conductivity is evidence against the d-wave scenario. However, the field dependence does seem to suggest that the anisotropic s+- picture is a likely candidate for the order parameter, although more theoretical work is required to confirm this. Thermal conductivity measurements were also made on the spin-ice system Ho2Ti2O7 between 50 mK and 1.4 K in applied magnetic fields from 0 T to 8 T in an attempt to observe the much debated magnetic monopole-like quasiparticles. An applied magnetic field of 8 T was applied along to [111] direction as to fully polarize the magnetic moments in order to extract the phonon contribution of the thermal conductivity. The low field thermal conductivity reveals evidence for an additional heat transfer mechanism that also scatters phonons which is magnetic in nature. This is taken to be evidence for the existence of monopole-like excitations out of the spin-ice ground state and is described by existing Debye-Huckel theory. Thermal transport was used in conjunction with charge conductivity to study the unconventional quantum critical point (QCP) in the heavy-Fermion superconductor beta-YbAlB4 at temperatures down to 60 mK and in fields up to 2 T. The results show that the Wiedemann-Franz law (WFL) is obeyed down to the lowest measured temperatures indicating that the Landau quasiparticles remain intact near the QCP. A small suppression of the Wiedemann-Franz ratio (L/L0 = kappa / sigma T L0) is seen at finite temperatures (T < 1 K) with minimal dependence on magnetic field. Comparing with other similar quantum critical systems, it becomes apparent that inelastic scattering events have little effect on the transport and are mainly field independent in beta-YbAlB4. An overview of the design for a new thermal conductivity mount is also presented. The design hinges around the idea of building the experiment mount into a small copper box rather than on an open frame. Not only does this provide mechanical stability for safe transportation, it also reduces the noise caused by electromagnetic interference (EMI) in the sample thermometers by more than a factor of ten over the old wire frame design.