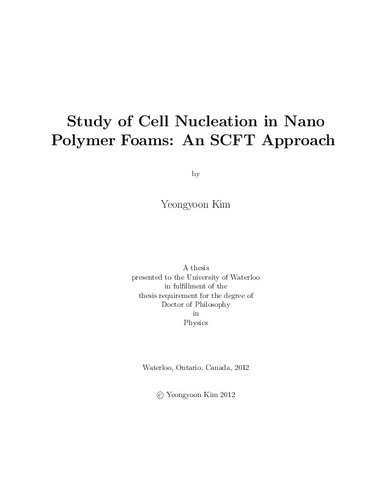 This thesis is about "nano-cellular" polymer foams, i.e., to understand nano-bubble nucleation and growth mechanisms, we used Self-Consistent Field Theory(SCFT) for the research.\\ Classical Nucleation Theory (CNT) is often used to calculate nucleation rates, but CNT has assumptions which break down for a nano-sized bubble: it assumes planar sharp interfaces and bulk phases inside bubbles. Therefore, since the size of a nano-sized bubble is comparable to the size of the polymer molecule, we assumed that a bubble surface is a curved surface, and we ivestigated effects of curvature on the nucleation barrier. SCFT results show that sharper curvatures of smaller s cause a higher polymer configurational entropy and lower internal energy, and also the collapse of the bulk phase for smaller bubbles causes low internal energy. Consequently, the homogenous bubble nucleation barrier for curved surfaces is much smaller than flat surface (CNT prediction).\\ We calculated direct predictions for maximum possible cell densities as a function of bubble radius without calculation of nucleation barrier or nucleation rates in CNT. Our results show higher cell densities at higher solvent densities and lower temperatures. Moreover, our cell density prediction reveals that rather than surface tension, the volume free energy, often labelled as a pressure difference in CNT, is the dominant factor for both cell densities and cell sizes. This is not predicted by CNT.\\ We also calculated direct predictions for the maximum possible cell densities as a function of system volume in compressible systems. With an assumption that system pressure has an optimal pressure which gives the maximal density of good quality foams (bulk phase inside bubble), we calculated the inhomogeneous system pressure, the homogeneous system, and cell density as a function of system volume.\\ Maximal cell prediction in compressible system shows the incompressible system prediction is the upperbound maximal cell density, and qualitatively consistent with the compressible system results - higher cell densities at low temperatures and high solvent densities.\\ In addition, our results show a bigger expansion as well as a high cell density at low temperature and high solvent density, but temperature is a more dominant factor than the solvent density. From our results, we assume that a quick pressure dropping is required to get a better quality foam of a higher cell density.