Investigating Selection above a Multitouch Surface 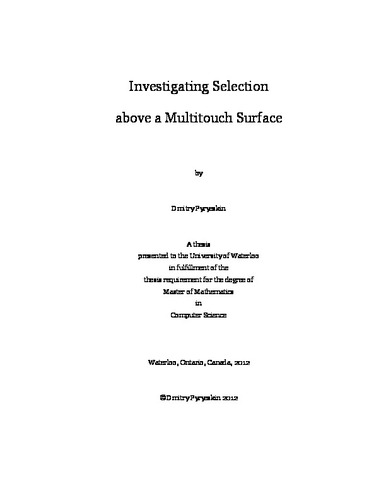 Above-surface interaction is a new and exciting topic in the field of human-computer interaction (HCI). It focuses on the design and evaluation of systems that humans can operate by moving their hands in the space above or in front of interactive displays. While many technologies emerge that make such systems possible, much research is still needed to make this interaction as natural and effortless as possible. First this thesis presents a set of guidelines for designing above-surface interactions, a collection of widgets that were designed based on these guidelines, and a system that can approximate the height of hands above a diffused surface illumination (DSI) device without any additional sensors. Then the thesis focuses on interaction techniques for activating graphical widgets located in this above-surface space. Finally, it presents a pair of studies that were conducted to investigate item selection in the space above a multitouch surface. The first study was conducted to elicit a set of gestures for above-table widget activation from a group of users. Several gestures were proposed by the designers to be compared with the user-generated gestures. The follow-up study was conducted to evaluate and compare these gestures based on their performance. The findings of these studies showed that there was no clear agreement on what gestures should be used to select objects in mid-air, and that performance was better when using gestures that were chosen less frequently, but predicted to be better by the designers, as opposed to those most frequently suggested by participants.