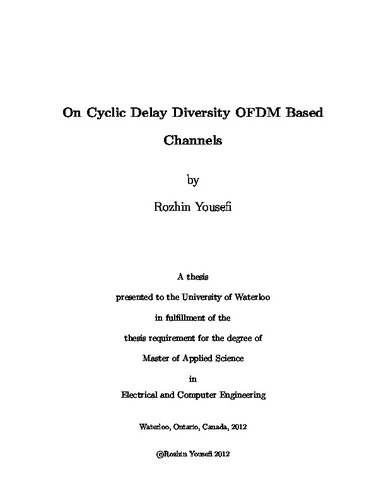 Orthogonal Frequency Division Multiplexing, so called OFDM, has found a prominent place in various wireless systems and networks as a method of encoding data over multiple carrier frequencies. OFDM-based communication systems, however, lacking inherent diversity, are capable of benefiting from different spatial diversity schemes. One such scheme, Cyclic Delay Diversity (CDD) is a method to provide spatial diversity which can be also interpreted as a Space-Time Block Coding (STBC) step. The main idea is to add more transmit antennas at the transmitter side sending the same streams of data, though with differing time delays. In [1], the capacity of a point-to-point OFDM-based channel with CDD is derived for inputs with Gaussian and discrete constellations. In this dissertation, we use the same approach for an OFDM-based single-input single-output (SISO) two-user interference channel (IC). In our model, at the receiver side, the interference is treated as noise. Moreover, since the channel is time-varying (slow-fading), the Shannon capacity in the strict sense is not well-defined, so the expected value of the instantaneous capacity is calculated instead. Furthermore, the channel coefficients are unknown to the transmitters. Thus, in this setting, the probability of outage emerges as a reasonable performance measure. Adding an extra antenna in the transmitters, the SISO IC turns into an MISO IC, which results in increasing the diversity. Both the continuous and discrete inputs are studied and it turns out that decoding interference is helpful in some cases. The results of the simulations for discrete inputs indicate that there are improvements in terms of outage capacity compared to the ICs with single-antenna transmitters.