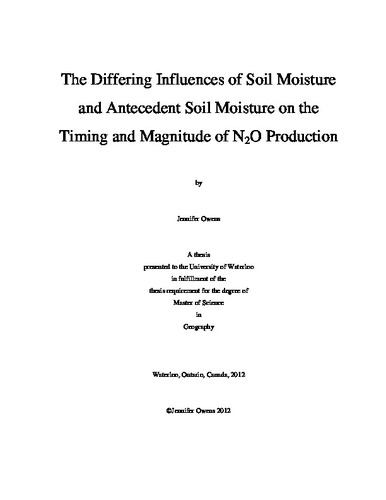 Riparian soils are thought to be potential hotspots for nitrous oxide (N2O) fluxes from incomplete denitrification, with soil moisture cited as a primary controller, however, because there are multiple potential pathways for N2O production in soils, each with their own environmental regulators, the timing and magnitude of N2O fluxes in difficult to predict. Often empirical observations have failed to yield consistent relationships between environmental factors in lab and field scenarios. This thesis characterizes the hydrological controls (soil moisture, water table depth, and precipitation) on N2O fluxes from different positions on the riparian landscape (dry, loamy upland, and wet, organic lowland) in the field during the growing season. Nitrous oxide and carbon dioxide (CO2) fluxes in the field, as well as environmental and climatic variables, were measured in the field. Over the three year study period N2O fluxes were consistently correlated with soil temperature during the growing season, but not with any hydrological factors. However, direct relationship between soil hydrology and N2O fluxes was more evident on an “episodic” time scales. Lab experiments were used to assess the influence of AHC on N2O production under controlled conditions. Experiment 1 employed intact soil cores collected from the upland and lowland positions of the riparian landscape and the cores were subjected to one of two contrasting moisture regimes (wet-dry-wet or dry-wet-dry). Experiment 2 used homogenized soils from the upland and lowland positions on the landscape to create a multi-factorial experiment that simultaneously altered soil moisture and soil substrate concentrations (nitrate, ammonium, organic carbon). The lab results showed that different AHC resulted in differences to the timing and magnitude of N2O fluxes, and that these patterns differed with soil type. Nitrous oxide production was often correlated with soil moisture in the lowland soils regardless of AHC. The results from Experiment 2 suggested that the upland soils were C limited, which resulted in an unpredictable relationship between soil moisture and N2O production during different AHC. The lowland soils were less affected by AHC as they were not N or C limited like the upland soils. It can be concluded from this research that the relationship between soil moisture and N2O fluxes is influenced by AHC through the influence of AHC on soil N and C dynamics. Given the differences in C and N dynamics between soils types, and the influence of AHC on soil C and N, it can be concluded that a derived relationship between soil moisture and N2O fluxes may not be directly transferable between soil types unless C and N are considered.

Jennifer Owens (2012). The Differing Influences of Soil Moisture and Antecedent Soil Moisture on the Timing and Magnitude of N2O Production. UWSpace. http://hdl.handle.net/10012/7109