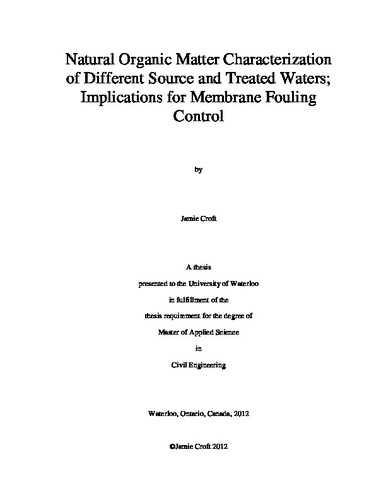 The objective of drinking water treatment is to provide water which is free of pathogens, is chemically and biologically stable, and is of good aesthetic quality. Natural organic matter (NOM) is present in all natural waters and can make meeting these goals more challenging. Not only does it undergo adverse reactions with disinfectants such as chlorine, it also impacts the biological stability of water within the distribution system and contributes to undesirable aesthetic qualities such as taste and odour. NOM has also been implicated in membrane fouling, which continues to be a significant operational problem preventing wider implementation of this process. Due to its highly variable heterogeneous nature, NOM can be difficult to characterize in terms of its specific composition, however recent analytical advancements are allowing for a better understanding of its behaviour in water treatment. Two promising tools for NOM characterization include Liquid Chromatography Organic Carbon Detection (LC-OCD) and Fluorescence Excitation Emission Matrix (FEEM) analyses. In this research both techniques were applied to samples taken from five full scale facilities in Ontario, Canada over all four seasons. The source waters for these treatment locations consisted of both river (Grand River, Ottawa River) and Great Lake waters (Lake Huron, Lake Erie, Lake Ontario), and an additional raw source (Saugeen River) was also monitored. The plants all employed granular media filtration, but had differences including enhanced coagulation, ozonation, biofiltration and sand ballasted flocculation. Other relevant water quality parameters were also monitored (TOC, DOC, UV254, pH, conductivity etc.) as well as plant operating conditions (dosages, flows, filter run times etc.) to investigate their impact on removal of specific NOM fractions. Four of the waters (Grand River, Ottawa River, Lake Erie and Lake Ontario) were selected based on the initial survey due to their NOM composition, for bench scale ultrafiltration (UF) membrane fouling experiments. The experiments were run at constant flux for a period of five days, with an automated permeation cycle and backwash. The impact of biopolymers on hydraulically reversible and irreversible fouling was of specific interest. Important seasonal trends were identified for all waters, with biopolymer content increasing at higher temperatures. Useful comparisons could also be made between different treatment processes including conventional and enhanced coagulation. The enhanced process while significantly improving the removal of humic substances, was not beneficial in terms of biopolymer removal, suggesting a different removal mechanism for these two fractions. The removal of low molecular weight ozonation by-products during full scale biofiltration was well demonstrated, and other fractions (building blocks, biopolymers) had varying degrees of removal, which was more dependent on temperature. Principle component analysis (PCA), an advanced multivariate statistical method, was successfully applied to a FEEM data set containing five different waters at varying degrees of treatment. Three principle components related to humic-like, protein-like and particulate/colloidal material were identified, and served as useful complementary information to the LC-OCD results. The humic-like component was found to have relatively good correlation to the humic fraction from LC-OCD analysis, with some deviation in the post-ozonation samples (which underwent greater structural changes not captured by LC-OCD). The biopolymer fraction was shown to have good correlation to hydraulically reversible membrane fouling across all four waters. The same could not be said for hydraulically irreversible fouling for which a combined fouling layer (with particulate and colloidal material) is hypothesized. This research provides those working in the water treatment sector with greater insight into NOM behaviour during various levels of treatment. As biopolymers were demonstrated to impact hydraulically reversible fouling (relatively independent of water quality), their removal prior to membrane filtration could significantly extend operational cycles by extending time between backwashes, thereby reducing energy requirements. As biopolymers are also suspected in forming a combined fouling layer, their removal can potentially minimize chemical cleaning requirements (and extend the life cycle of the membranes). The removal of biopolymers through coagulation was well demonstrated. Biofiltration is also expected to perform well as a membrane pre-treatment due its ability to remove biopolymers and particulate/colloidal matter. The ability of biofiltration to control biological re-growth in the distribution system (by removing low molecular weight biodegradable products) was also shown using LC-OCD and FEEM analysis.