Effects of Dysphoria on the Temporal Dynamics of Intimates' Interpersonal Behaviour 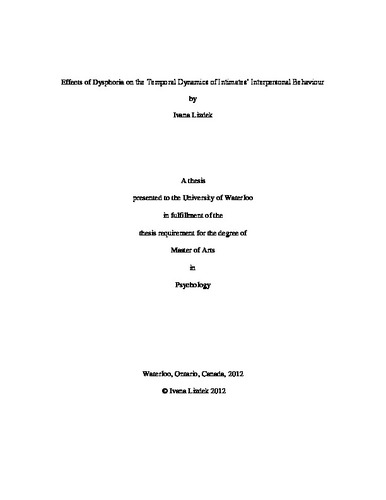 When romantic partners interact together, they continually respond to each other in ways that yield distinctive across-time patterns of behaviour. To illuminate specific ways in which dysphoria may influence the dynamics of marital communication, the present study investigated how dysphoria in either spouse may affect such across-time patterns of interpersonal behaviour. Using a computer joystick device, observers rated moment-to-moment levels of dominance and affiliation for each partner in videotaped conflict interactions, one preceded by a sad mood induction for the wife, and the other with no mood induction, of 60 romantic couples. As a measure of dysphoria, all participants completed the Beck Depression Inventory-II (BDI-II; Beck, Steer, & Brown, 1996). The data for each couple were then submitted to time series analyses, including regression and cross-spectral analysis. Results revealed that husbands’ and wives’ dysphoria had strongly differentiated effects on the marital interaction dynamics. Specifically, wives’ dysphoria affected how dominance was handled between partners. Higher wife’s dysphoria was significantly related to wife’s change in dominance and inversely related to husband’s change in dominance. That is, the higher the wife’s dysphoria, the more dominant she became and the more submissive her husband became over the course of the interaction. In contrast, husbands’ dysphoria affected affiliation patterns during conflict interactions. Higher husband’s dysphoria was inversely related to both wife’s change in affiliation and the couple’s level of entrainment on affiliation. That is, the higher the husband’s dysphoria, the less affiliative the wife became over time and the less entrained the partners were on affiliation. The wife’s mood induction mostly had no effect on the interaction dynamics examined. In summary, wives’ dysphoria tended to affect the dynamics of dominance during conflict interactions, whereas husbands’ dysphoria tended to affect the dynamics of affiliation. The results shed new light on the role each spouse may play in managing marital disagreements and how dysphoria disrupts patterns of interpersonal behaviour in such interactions.