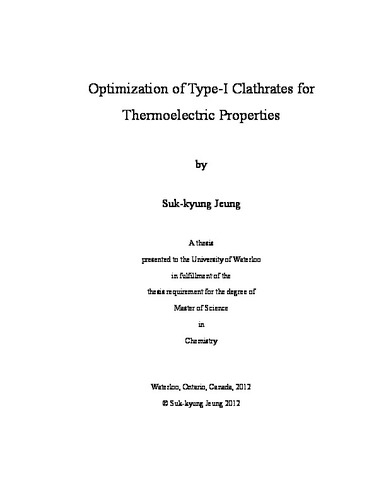 The increase in waste heat after consuming energy or burning fossil fuels is an issue environmentally and economically. Thermoelectric (TE) materials are developed to use in various applications because of their ability in converting waste heat into electricity. However, the applications are limited due to a low efficiency of materials, and research on thermoelectric materials is an on-going project for future use. Type-I clathrates are one of the TE materials which are studied in depth since the proposal of Slack’s PGEC (Phonon-Glass-Electron-Crystal) concept in 1995 due to their excellent thermoelectric properties. In this study, development and optimization of quaternary type-I clathrates will be the focus because double substitution often leads to better figure-of-merit, ZT, but it hasn’t really been studied. Higher ZT value is necessary because the energy conversion efficiency of TE materials is depending on the ZT value along with a larger temperature difference. Addition of lanthanoid elements as 2nd guest atoms to the main type-I clathrate structure, realized in Ba8Ga16Ge30, will be attempted to form quaternary compounds. The formation of the quaternary clathrates will be analyzed through powder X-ray diffraction, single crystal analysis and energy dispersive X-ray analysis. Also, as the performance of TE materials is examined through the figure of merit, ZT = TS²σ/κ, various techniques will be used to determine the Seebeck coefficient, the electrical conductivity and the thermal conductivity. The quaternary clathrates, Ba8-xLnxGa16Ge30 and Ba8-xLnxGa16+xGe30-x, where Ln = La, Ce and Eu were synthesized from the pure elements in stoichiometric ratios at 1000°C with slow cooling to room temperature. The products were then annealed at 600°C to acquire homogeneous samples for analyses. The various compositions of lanthanoid were intercalated into the structure of clathrates, which resulted in the quaternary clathrates with homogeneity. The crystal structure of quaternary clathrates with the space group of Pm-3n exhibited the same structure type as the ternary clathrates. The successfully formed products were refined with Rietveld refinements to understand their structures. The Eu containing clathrates crystallized with a lattice parameter a = 10.78251(6) Å, V = 1253.60(2) Å³, for x = 0.3. The Ce containing clathrates also adopted the same space group with a lattice parameter a = 10.77331(6) Å, V = 1250.40(2) Å³, for x = 0.3. The La containing clathrates formed with a lattice parameter a = 10.78494(6) Å, V = 1254.45(2) Å³, for x = 0.3. Between 0.2 and 1.0 lanthanoid elements per formula unit were substituted with decreasing amount of barium where the actual amount of Ln in clathrates was lower than nominal amount. All these quaternary clathrates were found to be n-type semiconductors as determined through the Seebeck coefficient and electrical conductivity measurements.