Electronic and Optical Properties of Silicon Nanowires: Theory and Modeling 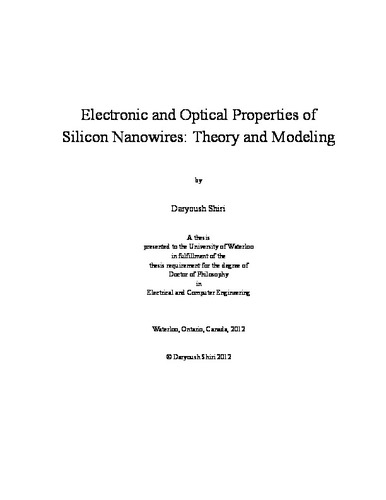 Narrow silicon nanowires host a rich set of physical phenomena. Understanding these phenomena will open new opportunities for applications of silicon nanowires in optoelectronic devices and adds more functionality to silicon especially in those realms that bulk silicon may not operate remarkably. Compatibility of silicon nanowires with the mainstream fabrication technology is also advantageous. The main theme of this thesis is finding the possibility of using silicon nanowires in light sources; laser and light emitting diodes. Using Tight Binding (TB) and ab-initio Density Functional Theory (DFT) methods it was shown that axial strain can induce significant changes in the effective mass, density of states and bandgap of silicon nanowires. Generality of the observed effects was proven by investigating nanowires of different crystallography, diameter and material (e.g. germanium nanowires). The observed direct to indirect bandgap conversion suggests that strain is able to modulate the light emission properties of silicon nanowires. To investigate this possibility, spontaneous emission time was formulated using perturbation theory including Longitudinal Optical (LO) and Acoustic (LA) phonons. It was observed that corresponding to bandgap conversion, the spontaneous emission time can be modulated by more than one order of magnitude. This emanates from bandgap conversion and symmetry change of wave function in response to strain. A mechanism for population inversion was proposed in the thesis which is based on the Ensemble Monte Carlo (EMC) study of carrier statistics in direct and indirect conduction sub bands. By calculating all possible electron-phonon scattering mechanisms which may deplete the already populated indirect subband, it was shown that at different temperatures and under different electric fields there is a factor of 10 difference between the population of indirect and direct sub bands. This suggests that population inversion can be achieved by biasing an already strained nanowire in its indirect bandgap state. The light emission is possible then by releasing or inverting the strain direction. A few ideas of implementing this experiment were proposed as a patent application. Furthermore the photo absorption of silicon nanowires was calculated using TB method and the role of diameter, optical anisotropy and strain were investigated on band-edge absorption.