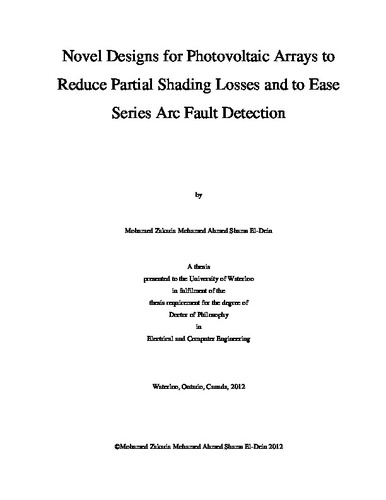 A mismatch in a photovoltaic array implies differences in the I-V characteristics of the modules forming the array which can lead to significant energy losses known as mismatch losses. The sources of mismatch losses could be easy- or difficult-to-predict sources. This thesis proposes novel designs for photovoltaic arrays to reduce mismatch losses. The mismatch from easy-to-predict sources and its resulting losses can be reduced by altering the interconnection of the array. Therefore, this thesis proposes an optimal total-cross-tied interconnection, based on a thorough mathematical formulation, which can significantly reduce mismatch losses from easy-to-predict sources. Application examples of the operation of the optimal total-cross-tied interconnection under partial shading are presented. The effect of partial shading caused by easy- or difficult-to-predict sources can be considerably reduced by photovoltaic array reconfiguration. This thesis proposes a novel mathematical formulation for the optimal reconfiguration of photovoltaic arrays to minimize partial shading losses. The thesis formulates the reconfiguration problem as a mixed integer quadratic programming problem and finds the optimal solution using branch-and-bound algorithm. The proposed formulation can be used for equal or non-equal number of modules per row. Moreover, it can be used for fully reconfigurable or partially-reconfigurable arrays. Application examples of the operation of the reconfigurable photovoltaic array under partial shading are presented. Finally, the recently updated American National Electric Code requires the presence of a series arc fault detector in any Photovoltaic installation operating at a voltage greater than or equal to 80V. However, the Photovoltaic market nowadays lacks the presence of an accurate series arc fault detector that can detect series arc faults and discriminate between them and partial shading. The work in this thesis proposes an algorithm that can detect series arc faults and discriminate between them and partial shading in total-cross-tied arrays. This algorithm is based on the measurement of instantaneous row voltages.