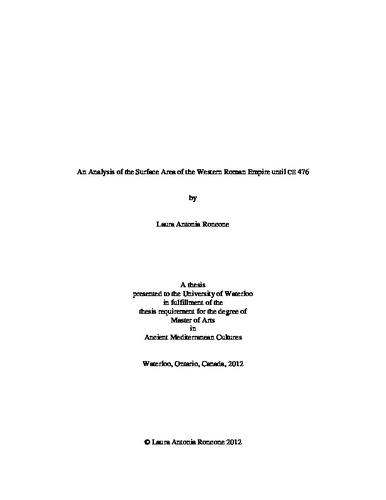 In 1968, Rein Taagepera created growth curves of four empires by measuring the surface area of each and plotting his data on a graph of area versus time. He used his growth curves to analyse the development of empires quantitatively, as he considered surface area to be the best measurable indicator of an empire’s strength. His growth curve of the Roman Empire, in particular, has been referenced numerous times by scholars researching the decline and fall of complex civilizations to support their individual analyses of the collapse of Rome. While this thesis surveys only the territories of the Western Roman Empire, many of the parameters used by Taagepera have been either borrowed or adapted in order to define, measure, and graph the surface area of the Western Empire as precisely as possible. This thesis also adds further precision and validity to Bryan Ward-Perkins’ theory that surface area can be used to analyse and quantify the collapse of a complex society accurately. In order to demonstrate the extent to which differing circumstances and outcomes of provincial history impacted the total surface area of the Western Roman Empire, it was essential to include not only an overview of Rome’s extensive history, but also to establish the chronology, as it related to the Roman Empire, of each individual province, territory, and client kingdom within the Western Empire. Detailed chronologies of Noricum and Britannia have been included to serve as case studies as they comprise a broad range of distinct characteristics and so represent typical western provinces. My research of the history and geography of the Roman Empire has generated a comprehensive inventory that includes all the pertinent onomastic and chronological data needed to measure the surface area of each of Rome’s western provinces and client kingdoms. When plotted on a graph of area versus time, my data not only produced an accurate representation of the actual surface area of the Western Roman Empire, but also one that facilitates temporal analyses of territorial fluctuations at any given point in the Empire’s history until the fall of the Western Empire in CE 476.