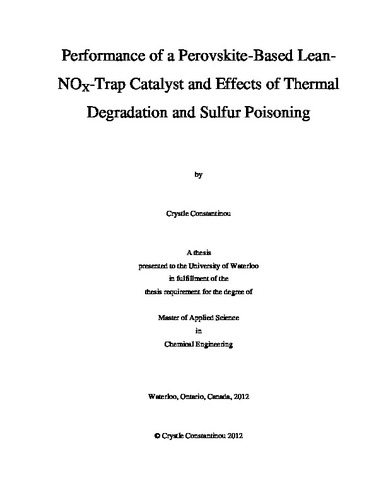 Increases in vehicle exhaust emission regulations have led to research, development and improvements in catalytic converter technologies for gasoline-powered vehicles since the 1970s. Nowadays, there are strict regulations and standards for diesel engines as well, and one of the regulated species is nitrogen oxides (NOX). The lean NOX trap (LNT) catalyst has been studied and developed for use in lean burn (of which diesel is an example) engine exhaust as a technology to reduce NOX to N2. Typical LNT catalysts contain Pt, which catalyzes NO oxidation and NOX reduction, and an alkali or alkaline earth material for NOX storage via nitrate formation. The catalyst is operated in a cyclic mode, with one phase of the cycle under oxidizing conditions where NOX is trapped, and a second phase, which is reductant-rich relative to O2, where stored NOX is reduced to N2. A recently developed catalyst uses a perovskite material as part of the LNT formulation for the oxidation reactions thereby eliminating the need for Pt in a LNT. This catalyst does include Pd and Rh, added to accommodate hydrocarbon oxidation and NO reduction, respectively. Ba was used as the trapping component, and Ce was also part of the formulation. NO oxidation kinetics over the fully-formulated and bare perovskite material were determined, with NO, O2 and NO2 orders being at or near 1, 1 and -1, respectively for both samples. The fully-formulated sample, which contains Ba supported on the perovskite, was evaluated in terms of NOX trapping ability and NOX reduction as a function of temperature and reduction phase properties. Trapping and overall performance increased with temperature to 375°C, primarily due to improved NO oxidation, as NO2 is more readily trapped, or better diffusion of nitrates away from the initial trapping sites. At higher temperatures nitrate stability decreased, thus decreasing the trapping ability. At these higher temperatures, a more significant amount of unreduced NOX formed during the reduction phase, primarily due to nitrate instability and decomposition and the relative rates of the NOX and oxygen storage (OS) components reduction reactions. Most of the chemistry observed was similar to that observed over Pt-based LNT catalysts. However, there were some distinct differences, including a stronger nitrate diffusion resistance at low temperature and a more significant reductant-induced nitrate decomposition reaction. The perovskite-based lean NOX trap (LNT) catalyst was also evaluated after thermal aging and sulfur exposure. NO oxidation, NOX trapping ability and NOX reduction as a function of temperature and reduction phase properties were evaluated. Similar overall performance trends were seen before and after degradation, however lower performance after thermal aging and sulfur exposure were seen due to sintering effects and possible build-up of S species. Although performance results show that most of the sulfur was removed after desulfation, some sulfur remained affecting the trapping and reduction capabilities as well as the water gas shift (WGS) extent at lower temperatures. The Oxygen storage capacity (OSC) on the other hand was maintained after the catalyst was exposed to thermal aging and sulfur poisoning then desulfation, all of which suggest that the perovskite or Pd components were irreversibly poisoned to some extent.