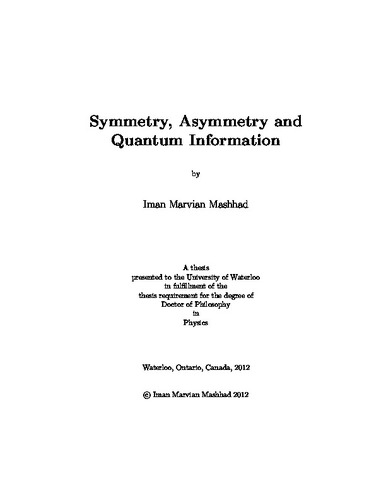 It is impossible to overstate the importance of symmetry in physics and mathematics. Symmetry arguments play a central role in a broad range of problems from simplifying a system of linear equations to a deep role in organizing the fundamental principles of physics. They are used, for instance, in Noether’s theorem to find the consequences of symmetry of a dynamics. For many systems of interest, the dynamics are sufficiently complicated that one cannot hope to characterize their evolution completely, whereas by appealing to the symmetries of the dynamical laws one can easily infer many useful results. In part I of this thesis we study the problem of finding the consequences of symmetry of a (possibly open) dynamics from an information-theoretic perspective. The study of this problem naturally leads us to the notion of asymmetry of quantum states. The asymmetry of a state relative to some symmetry group specifies how and to what extent the given symmetry is broken by the state. Characterizing these is found to be surprisingly useful to constrain which final states of the system can be reached from a given initial state. Another motivation for the study of asymmetry comes from the field of quantum metrology and relatedly the field of quantum reference frames. It turns out that the degree of success one can achieve in many metrological tasks depends only on the asymmetry properties of the state used for metrology. We show that some ideas and tools developed in the field of quantum information theory are extremely useful to study the notion of asymmetry of states and therefore to find the consequences of symmetry of an open or closed system dynamics. In part II of this thesis we present a novel application of symmetry arguments in the field of quantum estimation theory. We consider a family of multi-copy estimation problems wherein one is given n copies of an unknown quantum state according to some prior distribution and the goal is to estimate certain parameters of the given state. In particular, we are interested to know whether collective measurements are useful and if so to find an upper bound on the amount of entanglement which is required to achieve the optimal estimation. We introduce a new approach to this problem by considering the symmetries of the prior and the symmetries of the parameters to be estimated. We show that based on these symmetries one can find strong constraints on the amount of entanglement required to implement the optimal measurement. In order to infer properties of the optimal estimation procedure from the symmetries of the parameters and the prior we come up with a generalization of Schur-Weyl duality. Just as Schur-Weyl duality has many applications to quantum information theory and quantum algorithms so too does this generalization. In this thesis we explore some of these applications.