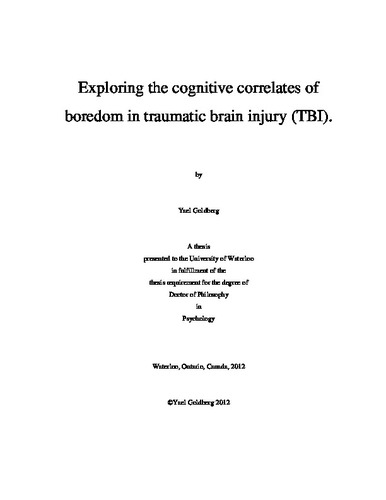 Boredom is a common human experience, yet little is known about its underlying neural mechanisms. This thesis first set out to investigate the construct of boredom and more closely examined its relationship to phenomenologically similar mood states of depression, apathy and anhedonia. Next, deficits in sustained attention, and novelty seeking were examined in patients with traumatic brain injury (TBI), who are characterized by atypically high levels of boredom. Study 1 established that although related to varying degrees to apathy, anhedonia, and depression, boredom is indeed a distinct emotional experience. Furthermore, two boredom proneness subtypes - agitated and apathetic - were identified which varied in their relationships to depression. The relationship between boredom and depression was found to be high only in the agitated boredom prone subtype, which is characterised by a high degree of motivation to engage in meaningful, stimulating activities despite the fact that all attempts to do so fail to satisfy. In Study 2, the relationship between boredom proneness and depression was found to be greater in TBI patients than in healthy controls. Using a behavioral measure of sustained attention (SART; Robertson et al., 1997), Study 3 demonstrated a relationship between boredom proneness and sustained attention in healthy controls, such that RTs were faster and commission errors more prevalent in the agitated boredom prone subtype. No relationship between boredom proneness and sustained attention was found in TBI patients. So while attention and boredom show a clear relationship in the healthy brain, this relationship may be disrupted in TBI patients. Finally, Study 4 demonstrated an association between agitated boredom proneness and a preference for novel stimuli across participant groups. In addition, patients had a poorer ability to discriminate between similar and dissimilar stimuli than controls, which was more evident in the agitated boredom prone group. It may be the case then that agitated boredom prone individuals fail to satisfy their desire to engage in stimulating activities in part because they fail to accurately identify when something is indeed novel. Taken together, these results highlight important distinctions between apathetic and agitated boredom proneness, and the way in which these subtypes relate to depression, attention, and novelty seeking, in brain injured patients and healthy controls. More work is needed to determine the role played by boredom in TBI, particularly as this evolves from acute to chronic stages of the illness. Importantly, identifying boredom as a key element in depressive mood disorders, attention deficits (e.g., attention deficit hyperactivity disorder), and novelty seeking behaviour, facilitates the design and implementation of appropriate intervention strategies. For example, it will become increasingly important to deal with boredom as a significant component of depression. Thus, the work presented here represents a novel and important contribution to the study of boredom in that it brings the field one step closer to understanding and treating the experience. Further investigation with greater numbers of patients is necessary to fully explicate the relationship between boredom and depression, attention, and novelty seeking in TBI.