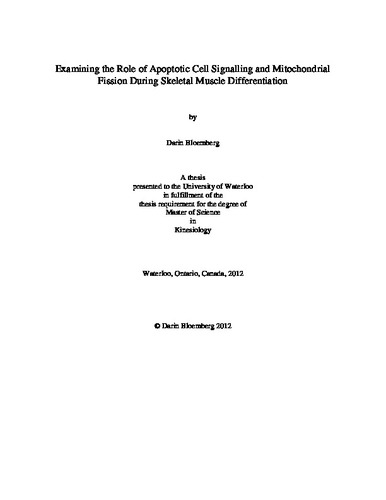 Cellular maturation (differentiation) and cell death (apoptosis) are two vital processes shared by virtually all mammalian cells types. Although these two events have disparate outcomes, recent evidence indicates their execution may involve similar cellular mechanisms. Considered the primary effectors of apoptosis, a family of proteolytic enzymes known as caspases become activated in response to upstream apoptotic signalling, and are responsible for cleavage of structural and regulatory proteins, nuclear degradation and DNA fragmentation, and cell blebbing. While these enzymes have a well-defined role in death, current research suggests their activity is necessary during the differentiation of several cell types including skeletal muscle. However, it is currently unknown how this pro-apoptotic environment is regulated to promote differentiation. A long known mediator of apoptotic signalling, the mitochondria, has recently been shown to affect apoptosis through changes to its morphology. Mitochondrial division (fission) and fusion are necessary for maintaining normal cellular function, although fission contributes to apoptotic signalling. In this study, we examined the mechanisms which lead to caspase activation during skeletal muscle differentiation, and determined the importance of mitochondrial fission to this process. It was hypothesized that typical mitochondrial-mediated apoptotic signalling would be responsible for activating caspases during myogenesis, partly due to increased fission. C2C12 mouse skeletal myoblasts maintained in culture were induced to differentiate by switching to low growth-factor media and collected at various time points during the differentiation process. Activity levels of caspases-2 and -3 transiently increased 51% and 2.5-fold, respectively, 1.5 days after inducing differentiation (p<0.05). No changes were observed in the activity levels of caspases-8 and -9. Although whole-cell levels of Bax and PUMA increased 16% and 21% (p<0.05), respectively, prior to the spike in caspase activity, levels of mitochondrial-Bax were matched by Bcl-2, resulting in no change to the mitochondrial Bax:Bcl-2 ratio early during differentiation. This ratio indicates the susceptibility of the mitochondria to release pro-apoptotic factors, and was associated with decreased cytosolic levels of Smac and cytochrome c by 63% and 75%, respectively, early during differentiation (p<0.05). Levels of the anti-apoptotic proteins Bcl-2 and ARC increased (p<0.05) as caspase activity diminished, possibly supporting their role in ensuring temporary caspase activation. Pharmacological inhibition of caspase-3 resulted in reduced differentiation as indicated by decreased myotube development and cell fusion events. These morphological changes were associated with decreased protein expression levels of the myogenic transcription factor myogenin (p<0.05), and the mature-muscle marker myosin (p<0.05). Likewise, chemical inhibition of caspase-2 activity impaired myotube development, cell fusion, as well as expression of myogenin (p<0.05) and myosin (p<0.05) similar to the inhibition of caspase-3. Finally, reducing mitochondrial fission with a chemical inhibitor of Drp1 function (mdivi-1) also prevented myotube development, resulting in undetectable levels of myosin expression and a 94% drop in cell fusion events. However, these effects were not due to decreased caspase activation. In contrast to our hypothesis, these results support the notion that mitochondrial apoptotic signalling is likely not responsible for inducing caspase activity during myogenesis. Furthermore, we report that mitochondrial fission is necessary for proper skeletal muscle differentiation, likely through its contribution to mitochondrial network morphological changes associated with myotube formation.