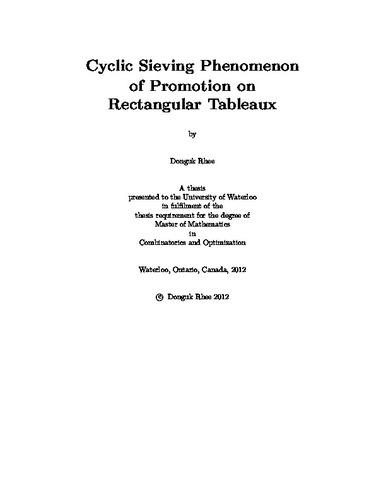 Cyclic sieving phenomenon (CSP) is a generalization by Reiner, Stanton, White of Stembridge's q=-1 phenomenon. When CSP is exhibited, orbits of a cyclic action on combinatorial objects show a nice structure and their sizes can be encoded by one polynomial. In this thesis we study various proofs of a very interesting cyclic sieving phenomenon, that jeu-de-taquin promotion on rectangular Young tableaux exhibits CSP. The first proof was obtained by Rhoades, who used Kazhdan-Lusztig representation. Purbhoo's proof uses Wronski map to equate tableaux with points in the fibre of the map. Finally, we consider Petersen, Pylyavskyy, Rhoades's proof on 2 and 3 row tableaux by bijecting the promotion of tableaux to rotation of webs. This thesis also propose a combinatorial approach to prove the CSP for square tableaux. A variation of jeu-de-taquin move yields a way to count square tableaux which has minimal orbit under promotion. These tableaux are then in bijection to permutations. We consider how this can be generalized.