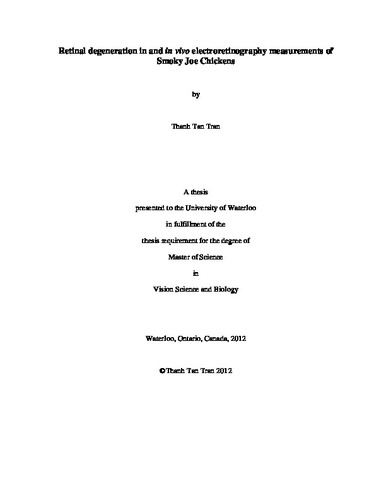 Inherited retinal degenerative diseases can affect various components of the retina leading to blindness. Five different mutant strains of chicken have been studied extensively as potential models for inherited retinal degeneration. The Smoky Joe (SJ) chicken is a sixth genetically blind strain of White Leghorns that shows various degrees of blindness at hatch and by 8 weeks post-hatch, have complete blindness for those that are homozygous. The objective of this study was to characterize the retinal degeneration in these birds by histology, both during embryonic and post-hatch development, and to the retinal function using electroretinograms (ERG). For both embryonic and post-hatch development, a significantly lower number of cells were found in the retina of blind birds compared to sighted (both p<0.0001). The significant contributor to cell number decrease was the loss of amacrine cells located in the inner nuclear layer. Photoreceptors were also found to potentially decrease in number, but at a later stage. ERG recordings revealed decreases in amplitudes of b-waves and oscillatory potentials in blind birds, but not in sighted. Both histology and ERG findings support the idea that the inner retinal cells are affected. The results indicate that degeneration in the Smoky Joe retina occurs mostly within the inner nuclear layer affecting amacrine cells. This hampers the functional capacity of the retina, causing blindness.