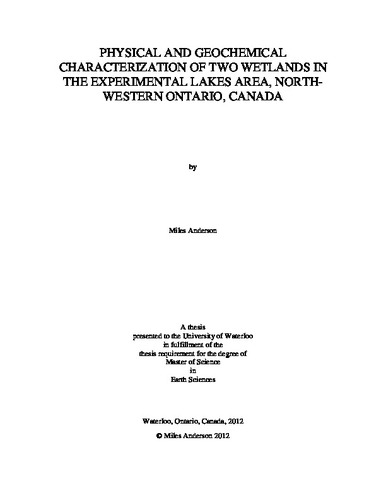 Anthropogenic disruptions in the form of hydrological alterations, such as dam construction and the associated water diversions are a cause of much upheaval to local and regional ecosystems. Lake 626 within the Experimental Lakes Area of north-west Ontario, along with its downstream wetlands, 626A and 626B are one such system. Construction of a dam at the L626 inflow has completely restricted water flow, reducing and reshaping the watershed, increasing water retention time, and decreasing outflow into the wetlands. This study investigates the state of each wetland through physical and geochemical characterization during the first year following the diversion. Previous studies have found that hydrological diversions in wetlands can lower water table levels, altering soil chemistry and producing a shift in floral and faunal communities. Ultimate consequences involve significant loss of wetland area through conversion to upland habitat. This provides a model for climatic warming scenarios, wherein sustained drought conditions can produce the same result. Boreal wetlands are surprising fragile ecosystems that store massive quantities of carbon and are at risk of releasing it in such situations. One study showed that an extended summer drought in an otherwise average year with above average precipitation produced losses of 90 g C/m2 over the course of the year. Maintenance of reduced-flow in wetlands 626A and 626B is expected to convert the system into a carbon source and reduce overall wetland area. Radiocarbon dating has revealed that following deglaciation, both 626A and 626B basins were open water wetlands, depositing limnic peat for about 3200 and 1300 years respectively. Each site then transitioned into open sedge dominated fen – 626B to the present and 626A until about 2.5 ka BP when Sphagnum began to develop. Wetland 626B is decidedly an open shrub/sedge fen, supporting Myrica gale, Chamaedaphne calyculata and Carex rostrata / lasiocarpa communities. Wetland 626A is a bog/fen complex, sharing similar communities in the fen areas, but housing a large, centrally located bog of shrub species overlying Sphagnum hummocks. Tritium values in 626A were similar to cosmic background levels, indicating that recharge of basal pore water has not occurred in at least 60 years. Tritium in 626B was much higher, suggesting a substantial difference in hydrology or peat hydraulic conductivity between the basins. Measurement of DOC profiles showed high concentrations in near-surface water, reaching over 80 mg/L, and dropping to about 20 mg/L at maximum depths. An opposite trend was seen for DIC and CH4 profiles which increased concentration with depth (25 – 70 mg/L DIC; 75 – 700 μmol/L CH4). Isotopically however, 13C signatures from basal DIC were more positive while signatures from CH4 were typically more negative (-6 ‰ to +4 ‰ DIC; -57 ‰ to -73 ‰ CH4). Breakdown of DOC by LC-OCD showed high concentrations of humic substances and low molecular weight neutrals. The origin of humic substances in surface water became more pedogenic with increasing distance from the L626 outflow, indicating the influence of decaying wetland vegetation on the DOC of adjacent water. A comparison between contemporary and future characterization of boreal peatlands under drought-like conditions will provide a better understanding of the impacts suffered by wetlands during hydrological alterations. The high sensitivity of wetlands to changing hydrology should also provide a measure for gauging the effects of long term climate warming. This will assist in the development of environmental policies to better govern both the establishment of water diversions and the multitude of other practices leading to climate change.