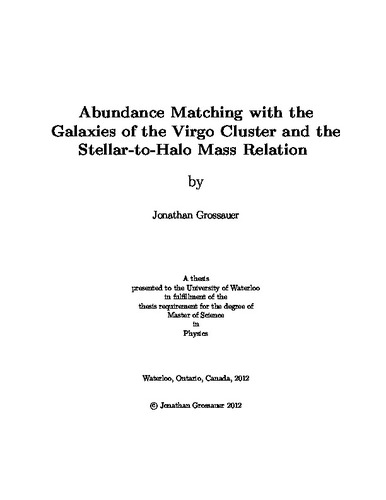 Using data from the Next Generation Virgo Cluster Survey and high-resolution simulations of Virgo cluster-like halos, we determine the stellar-to-halo mass relation (SHMR) for subhalos, using the technique of abundance matching. The subhalo SHMR differs markedly from its field galaxy counterpart, regardless of how the subhalo mass is defined (mass at z = 0, mass at infall, or maximum mass while in the field). The slope of the relation at low mass (M⋆<10^10 Msun) is in all cases steeper than the same for the field. We find conflicting indicators of whether this difference in slope indicates an increasing or decreasing dark-to-stellar ratio; further modelling is required to reach a definitive conclusion. We also find evidence for the existence of a measurable age gradient in velocity, such that older subhalos have lower velocities than their younger peers. This opens the possibility that good quality redshifts of the lower mass galaxies of the Virgo cluster might provide additional constraints on the SHMR at high redshift and its evolution. Finally, we investigate the degree to which mergers, particularly major mergers, cause mixing of old and new material in halos, which has implications for the robustness of any implied radial age gradient. We find only a slight increase in mixing for major mergers over minor mergers, and little evidence for any large amount of mixing being induced by mergers of any ratio.

Jonathan Grossauer (2012). Abundance Matching with the Galaxies of the Virgo Cluster and the Stellar-to-Halo Mass Relation. UWSpace. http://hdl.handle.net/10012/7062