The Stage History of Goethe's Faust I in Imperial Russia: Performance and Archival Record 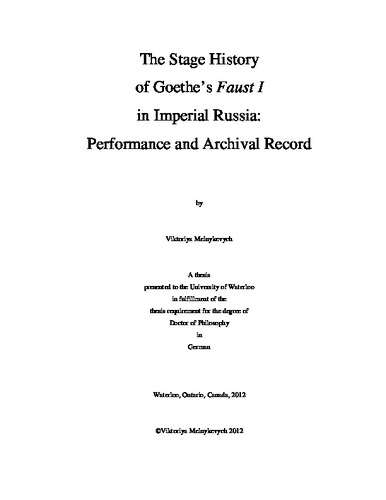 This dissertation is devoted to the stage history of Goethe’s Faust I in Imperial Russia with the goal of initiating academic discussion of this previously ignored topic. The significance of this study lies not only in the fact that it enlarges our comprehension of the play’s treatment in the Russian context, but more importantly in its direct implications for earlier studies of Russian literature in relation to Goethe’s Faust. The dissertation records analytically dramatic productions of the play before 1917 and provides a bibliography of their production, performance and reception processes. The central premise of the dissertation is that theatre is a social phenomenon, informed by the contemporary setting in which it is produced and received. With this in mind, five distinctive adaptations are investigated with the goal of identifying the peculiarities of the play’s treatment and highlighting the influences of the socio-historical factors surrounding it. In particular, this study considers the dependence of the adaptation on contemporary theatrical conventions and explores the relationship between theatre, culture and the state in Imperial Russia. It argues that a successful adaptation of Goethe’s Faust I in Imperial Russia was delayed until the flourishing of ‘directorial theatre’, which in turn opened new possibilities for future theatrical explorations of the play. The analysis describes strategies of cultural appropriation and affirms the conformity and sensitivity of theatre to the state.