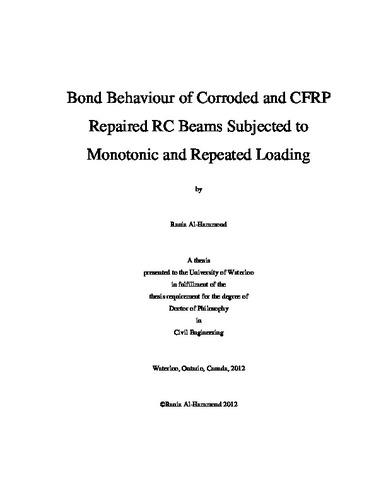 All reinforced concrete (RC) design theories are based on the assumption that concrete exhibits a perfect bond with the steel reinforcement. The bond between steel and concrete is essential to the transfer of the load applied from the concrete to the steel reinforcement. When steel bars are corroded, the concrete cracks, and the strength of the bond between the steel bars and the concrete is decreased. Structures such as bridges and marine structures are prone to corrosion. These structures are usually also subjected to repeated loading. Repeated loading can initiate cracks in the concrete surrounding the steel bars that propagate as the number of load cycles increases leading to the destruction of the concrete-steel interface and slip of the steel bars inside the concrete. The combined effect of corrosion and repeated loading reduces the service life of RC structures. This study investigated the effect of anchorage length and confinement from supports, stirrups and carbon fibre reinforced polymer (CFRP) on the bond behaviour of corroded and uncorroded reinforced concrete beams subjected to monotonic and repeated loading. Fifty-seven large-scale reinforced concrete beams (152*254*2000 mm) were tested for the purpose of this study. The variables were stirrup spacing (75 mm and 150 mm), anchorage length (200 mm, 350 mm and 650 mm), corrosion level (mild corrosion and high corrosion level), repair condition (wrapped or unwrapped with FRP sheets in the anchorage zone) and the fatigue load range. From this study, it was found that the resistance to bond stresses (forces) between the steel and concrete were provided mainly by the concrete keys. The bond stresses increased with the number of the concrete keys engaged. The factors that affected the number of concrete keys engaged were: confinement from the supports, confinement from the stirrups, confinement due to wrapping with FRP sheets and change in anchorage length. Decreasing the stirrup spacing from 150 mm to 75 mm increased the number of concrete keys engaged thus increasing the bond capacity and changed the mode of failure under monotonic loading from splitting to pullout. The beams with the first stirrup spacing (150 mm c/c) when tested under repeated loading failed by bond fatigue while the beams with the second stirrup spacing (75 mm c/c) failed by flexure at the end of a debonded region that started from the support. The failure mechanism is discussed for each case. The change in anchorage length from 200 mm to 350 mm increased the static and fatigue bond capacity of the beams by 60% and 12.5% respectively. The debonding for this group of beams (200 mm and 350 mm anchorage length) subjected to monotonic loading started from the pocket and propagated towards the support while the debonding for the 350 mm anchorage length beams subjected to repeated loading started at the location of a crack that widened while fatiguing the beam and propagated towards the support. The change in anchorage length from 350 mm to 650 mm did not affect the monotonic bond capacity of the beams since in this case, debonding was initiated from the supports and the change in anchorage length had little effect. The confinement with FRP sheets caused the concrete keys at both the top and bottom of the bar to be crushed and increased the bond stress of the wrapped beams. The bond strength of the beams repaired with CFRP sheet was governed by the strength of the FRP sheets for all anchorage lengths and corrosion levels. The CFRP repair of the 200 mm anchorage length set of beams increased the capacity of the uncorroded beams by 80% and the capacity of the corroded beams by about 25% under static and repeated loading compared to the control (uncorroded and unrepaired) beam. The CFRP repair of the 350 mm anchorage length set of beams changed the mode of failure from bond to flexure. The fatigue life for the beams varied linearly on a logarithmic scale with the load range applied with a shallow slope. Corroding the 200 mm anchorage length set of beams to a mild corrosion level decreased their fatigue strength by 34% compared to the control beams. Corroding the 350 mm anchorage length set of beams to a mild corrosion level did not affect the fatigue strength for the single beam that failed in bond. Finally a probabilistic approach was used to allow the design engineers to estimate the design fatigue life for similar beams with 95% probability for a given normalized stress ratio.