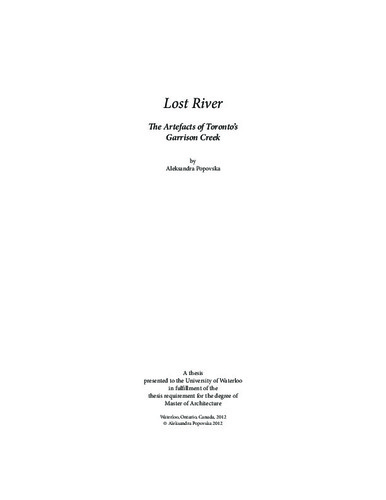 Once the founding site of the city of Toronto and its second largest watercourse, the Garrison Creek and its original landscape of dense forest and deep ravines have disappeared beneath an aggressive process of development and growth. Yet, despite attempts to subdue the creek, it continues to reveal itself through a collection of buildings, sites and structures, here collectively referred to as artefacts, that mark its path. This thesis presents the lost stories of the Garrison Creek as an investigation into the circumstances surrounding its burial and the city’s futile attempts to control its wilderness. Recounted as an historical narrative through the pairing of archival photographs and stories, this thesis exhibits a catalogue of the politics, betrayal, confusion, characters, voices, lessons and synchronicities that have emerged through the burial of the creek. The structure of this thesis is intended to draw out a definition that describes the tenuous, conflicted and complex relationship between a major North American city undergoing rapid change and the wilderness from which it emerged.