Growth Appropriate Planning in Canada: What factors lead to the implementation of progressive planning and economic development policy in Canadian Communities? 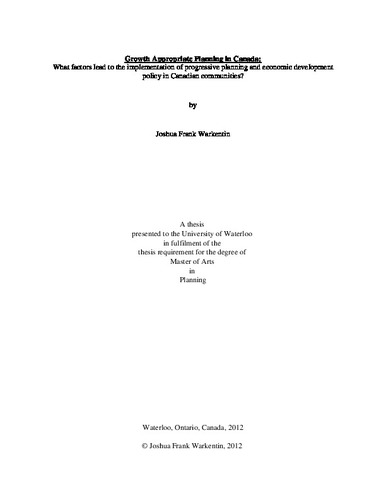 ABSTRACT A key feature of Canada’s urban system is the uneven distribution of population and economic growth. The 2011 Census showed that in the past five years more than 80% of the country’s growth was concentrated in the 10 largest Canadian Metropolitan Areas. As a result, more than 33% of Canada’s population centres lost population while another 27% experienced slow growth. Despite affecting a third of the country’s communities, population loss was concentrated primarily in remote communities with a population of less than 10,000. To better understand the processes and effects of slow growth and shrinkage in Canada this research was guided by three questions: • How do planners, economic developers and local officials define slow growth, decline and shrinkage? • What factors cause a community to implement growth appropriate planning tools and strategies and; • What components should be part of growth appropriate planning and economic development strategies? These questions were addressed using a qualitative survey which was answered by 70 participants in 51 communities. Overall there was little variance in how respondents defined decline and shrinkage. Given their stigma, each term was primarily associated with population loss, vacant structures and a variety of problems including financial stress and the loss of employment opportunities. When asked approximately 80% of Canadian communities used at least one progressive planning tool or strategy. The implementation of these tools was largely in response to the effects of slow growth and shrinkage as well as future economic outlook, support from local actors (municipal staff and officials, residents, local businesses) and senior governments. Few communities however used these tools to acknowledge or explicitly deal with their slow growth or shrinkage as it was feared that accepting either trend would scare away future investment. Almost all of the research participants agreed that areas of slow growth and population loss required different planning strategies than those experiencing rapid growth. These strategies included altering existing strategies to meet local needs and or creating entirely new planning tools and strategies, collaborating with other professionals, amending existing or creating new roles for planners, leverage local resources for community improvements and using an approach which equally addresses a community physical, economic, environmental and social needs. In addition, respondents noted that more research was required on how to plan in growth challenged areas and in particular, small rural communities.