The Effects of Worker Age on Lifting: Psychophysical Estimates of Acceptable Loads and their Link to Biomechanics 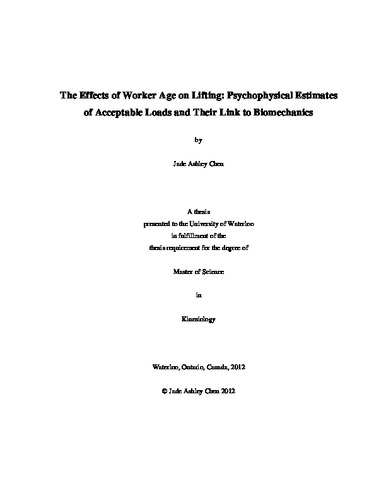 Canada’s workforce, as well as many other countries, is continuing to age as the baby boomer generation (those born between 1946 and 1964) ages and are remaining in the workforce longer. The number of older workers is estimated to double within the next 10 years (Perry 2010). With increased age, there are a number of factors that could influence worker performance and risk of injury. For example, aging is associated with decreased strength and cardiovascular fitness. However, it is unknown whether a worker’s estimates of how much they can safely lift (based on an approach called psychophysics, which is often used in the design of manual materials handling tasks) is lower for older compared to younger workers. The primary goal of this thesis was to test the hypothesis that psychophysical estimates of maximum acceptable forces would be lower for older workers than younger workers during selected lifting tasks. The secondary goal was to measure a host of variables to provide insights into what factors (e.g. kinematic, strength, cardiovascular) might be influencing potential age-related differences. The experimental testing protocol used a psychophysical approach to identify the maximum acceptable mass of an object during several lifting tasks. Participants comprised a total of 24 female workers (12 older (50+ years old) and 12 younger (20-30 years old)). The primary outcome of interest was the maximum acceptable weight of lift (MAWL) for an 8 hour work day that would allow each participant to ‘work as hard as they can without straining themselves, or becoming unusually tired, weakened, overheated, or out of breath’ (Snook and Ciriello 1991). The participants completed four lifting tasks: floor-to-knuckle height (1 lift/9s and 1 lift/2 min) and knuckle-to-shoulder height (1 lift/2 min and 1 lift/8 hr) by adding or removing lead shot to a lifting box. Tasks were 30 minute in duration; participants could adjust the load mass at any time during the trial. The dependent variables collected were the MAWL (the load mass at the end of the trial), maximum sagittal plane joint angles of the shoulder, hip and knee, overall and body part specific ratings of perceived exertion, and heart rate. Older workers selected MAWL values that were significantly lower (by approximately 24%) than their younger counterparts. These age-related differences were more prevalent for tasks which were constrained by strength (i.e. low frequency) compared to those with large cardiovascular requirements (i.e. high frequency). The only significant difference in the sagittal plane joint flexion angle was for the right hip during the 1 lift/2 min from floor-to-knuckle height lifting task, characterized by 34.4 degree decrease hip angle (more flexed) for the older workers. There were also no significant age-related differences in overall ratings of perceived exertion. The only body part-specific rating of perceived exertion with a significant age-related difference was for the knees, with the younger workers reporting the tasks more taxing on this joint than the older workers. Although there were no age-related differences in absolute heart rate values, the older workers were at a significantly higher percentage of their maximum heart rate. The results of this work suggest there is value in continued research probing whether current ergonomic and work design guidelines need to be updated to accommodate the aging working population. According to the results presented in this study, the current approaches often employed during the design of manual materials handling tasks (i.e. incorporating the loads that 75% of females could perform based on the Snook and Ciriello tables (1991) may not be sufficiently protective for older female workers in the workplace.

Jade Ashley Chen (2012). The Effects of Worker Age on Lifting: Psychophysical Estimates of Acceptable Loads and their Link to Biomechanics. UWSpace. http://hdl.handle.net/10012/7051