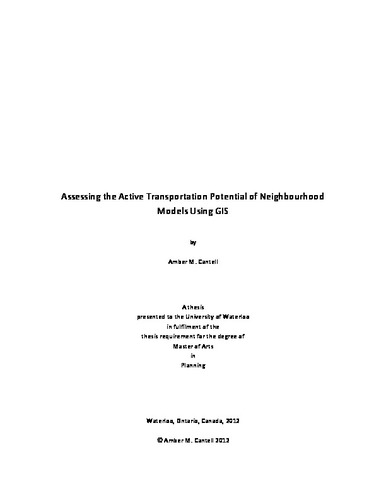 This study sought to determine how five neighbourhood models (the Grid, Loop and Cul-de-Sac, Fused Grid, New Urbanist and Greenway) compare in terms of the characteristics known to affect active transportation rates, and which model is most likely to be able to facilitate active transportation as a result. In order to do so, model principles and design characteristics of case study neighbourhoods were described and used to create a range of design specifications for each model. These specifications were then used to develop a GIS-based representation of an example neighbourhood for each model, which included the transportation network, parcels of different land use types and densities, homes and destinations. GIS, statistical and graph-based techniques were then used to comprehensively assess and compare the models in terms of their potential to facilitate walking and biking through the built environment correlates identified in through a literature review. The models were ranked on each variable, and then an overall comparison was made on the basis diversity (land use mix), density and design - the three dimensions identified by Cervero and Kockelman (1997) as being the key ways through which the built environment can contribute to creating walkable (and potentially bikeable) neighbourhoods. Additional measures related to trip characteristics and issues of importance to developers (such as buildable area) were also included. The results illustrate how each model’s unique approach to facilitating walking and/or biking is reflected in the built environment characteristics assessed. While a model that was strong in one category was often weaker in another (a finding which echoes that of Filion and Hammond, 2003), the three alternative models (Fused Grid, New Urbanist and Greenway) consistently fared better than the more traditional Grid and Loop and Cul-de-Sac designs, with the New Urbanist scoring the highest on the overall evaluation of walkability and bikeability and the Greenway the best on network design for cyclists. In addition to these findings, the study also provided an opportunity to explore several challenges related to model assessment, such as issues arising from frame choice, off-set networks, and the use of roads as proxies for active transportation networks.