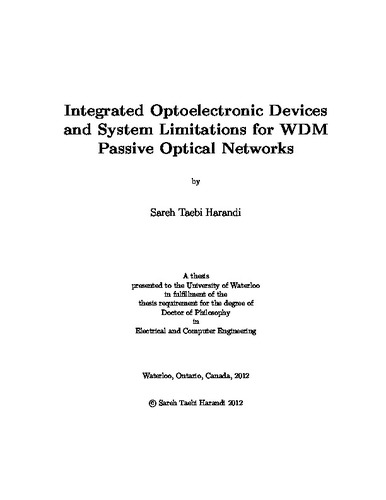 This thesis puts focus on the technological challenges for Wavelength Division Multiplexed Passive Optical Network (WDM-PON) implementation, and presents novel semiconductor optical devices for deployment at the optical network unit (ONU). The first-ever reported L-band Reflective semiconductor optical amplifier (RSOA) is presented based on InP-base material. A theoretical model is developed to estimate the optical gain and the saturation power of this device compared to a conventional SOA. Experiments on this device design show long-range telecom wavelength operation, with polarization-independent gain of greater than 20 dB, and low saturation output power of 0 dBm suitable for PON applications. Next, the effect of the amplified spontaneous emission noise of RSOA devices on WDM-PON system is investigated. It is shown through theoretical modeling and simulations that the RSOA noise combined with receiver noise statistics increase probability of error, and induce considerable power penalties to the WDM-PON system. By improving the coupling efficiencies, and by distributing more current flow to the input of these devices, steps can be taken to improve device noise characteristics. Further, in spectrally-spliced WDM-PONs deploying RSOAs, the effect of AWG filter shape on system performance is investigated. Simulation modeling and experiments show that deployment of Flat-band AWGs is critical for reducing the probability of error caused by AWG spectral shape filtering. Flat-band athermal AWGs in comparison to Gaussin-shape counterparts satisfy the maximum acceptable error probability requirements, and reduce the power penalty associated with filtering effect. In addition, detuning between two AWG center wavelengths impose further power penalties to the WDM-PON system. In the last section of this thesis, motivated by RSOA device system limitations, a novel injection-locked Fabry-Perot (IL-FP) device is presented which consists of a gain section monolithically integrated with a phase section. The gain section provides locking of one FP mode to a seed source wavelength, while the phase modulator allows for adjusting the wavelength of the internal modes by tuning bias current to maintain mode-locking. This device counters any mode drifts caused by temperature variations, and allows for cooler-less operation over a wide range of currents. The devices and the performance metrics subsequently allow for a hybrid integration platform on a silicon substrate and integrate many functionalities like reflective modulator with thin film dielectric filter and receiver on a single chip for deployment at the user-end of future-proof low cost WDM-PONs.