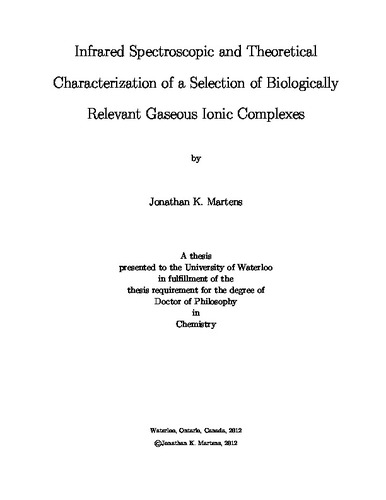 The structures of gaseous sodiated poly(alanines), Ala8−12 Na+ , were studied using infrared multiple photon dissociation (IRMPD) spectroscopy complimentarily to molecular dynamics and quantum chemical methods. Experimental results were obtained in both the 3000-3600 cm−1 region and the 1000-1800 cm−1 fingerprint region. Replica-exchange molecular dynamics (REMD) simulations using the multipolar-based polarizable AMOEBA force field were used to explore the conformational potential energy surface. A selection of resulting structures was extensively treated with a wide range of sequentially higher-order quantum chemical methods (from the RI-B3LYP-D/def2-SVP level to the RI-CC2/def2-TZVPP//RI-MP2/def2-SVP level). Calculated results suggest an α-helical conformation to be the lowest-energy for all Ala8−12 Na+ peptides, and that only for Ala8 Na+ does an accessible low energy structure exist that is also likely to contribute to the room temperature experiments. Experimental results confirmed these suggestions. All Ala8−12 Na+ peptides have a free C-OH band in the 3575 cm−1 region resulting from the free C-terminal C-OH of the α-helical conformation, a necessary observation for α-helical poly(alanine) peptides. As well, bound N-H bands were found to create somewhat of an α-helical signature in the 3315-3435 cm−1 region. For a given peptide, the order of vibrational modes follows the order of N-H· · ·O=C hydrogen bond lengths (longer bond length gives higher frequency N-H vibration). Additionally for α-helical conformations, calculated N-H· · ·O=C hydrogen bond lengths consistently decrease from the N-terminus (≈2.15 Ang.) to the C-terminus (≈1.90 Ang.). This results in a consistent and similar N-H stretching band between 3315-3425 cm−1 of ordered N-H modes. Proton-bound and sodium-bound-dimer ions (Ala6)2 H+, (Ala6)2Na+, (Ala12Ala6)H+, (Ala12Ala6)Na+, (Ala12)2Na+ were considered under similar experimental and computational methodologies; however, IRMPD results were obtained only for (Ala6)2H+. Computations indicate that in these sodium-bound and proton-bound dimers, α-helical type conformations are dominant for all but the smallest dimers ((Ala6)2H+, (Ala6)2Na+), suggesting that the interaction of Ala6H+ or Ala6Na+ with neutral Ala6 is not sufficiently stabilizing to the helical conformation. In the globular conformations, intermolecular and intramolecular hydrogen bonds and coordination of the Na+ are favoured at the expense of a more extensive intramolecular helical-type hydrogen bond network. The lowest-energy globular conformation of Ala6Na+ has both C-terminal COOH groups, one N-terminal NH2 group and an additional two C=O groups interacting with Na+. Such a coordination of the Na+ would not be possible if either or both peptides were helical, where instead, a low-coordination with three or four C=O groups would result. The relative stability of the α-helical conformation was found to be largely related to the stabilization of the macrodipole of the helix. Interaction of two peptides was, in some cases, found to favour formation of α-helical structure even where the isolated peptides would be globular, for example Ala12H+. Interaction of the protonated NH3+ groups with the C-terminal C=O of the neutral peptide places the positive charge somewhat on the exterior of the structure, apparently limiting the unfavourable electrostatic interaction of the positive charge with the dipole (positive) of the helix. (Ala12)2Na+ is a somewhat obvious case, where both monomer units of the dimer are calculated to be independently helical. Although when isolated, Ala12Na+ is calculated to be completely helical through all 12 residues, more complete coordination of the sodium by C=O groups (disrupting, to a small extent, the helix) is calculated to occur. This is likely a result of the interaction of the macrodipole of the helix and the sodium cation being weaker as a result of the interaction between the N-terminus of Ala12Na+ and the C-terminus of the neutral Ala12. Additionally, a series of gaseous ionic clusters formed from guanidinium chloride, [GuanxCl(x−1)]+ and [GuanxCl(x+1)]−, were studied under a similar computational methodology. IRMPD spectra were obtained in both the 3000-3600 cm−1 region and the 1000- 1800 cm−1 fingerprint region. REMD simulations were found to be necessary for locating conformational minima in clusters containing more than four guanidinium ions (x≥4). Experimental spectra were found to be well modelled at the B3LYP-D/def2-SVP level, in most cases. M06/6-311+G(d,p) vibrational analysis was found to be an improvement over B3LYP-D/def2-SVP analysis, at only a moderate increase in computational cost, while the significantly more costly MP2/6-31G(d) results did not offer improvement to the M06/6-311+G(d,p) results over a limited test set. Although only practically possible for the smallest clusters, consideration of anharmonic vibrational frequencies at the B3LYP/6-311+G(d,p) level offered significant improvement over harmonically calculated modes. Generally, smaller clusters were noted to largely adopt high-symmetry conformations, while larger clusters formed cage-like structures with a small number of guanidinium ions contained in the interior.