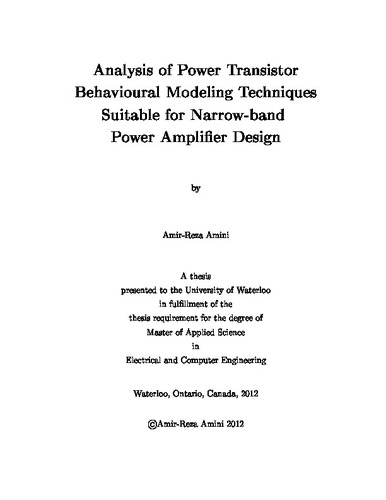 The design of power amplifiers within a circuit simulator requires a good non-linear model that accurately predicts the electormagnetic behaviour of the power transistor. In recent years, a certain class of large signal frequency-dependent black-box behavioural modeling techniques known as Poly-Harmonic Distortion (PHD) models has been devised to mimic the non-linear unmatched RF transistor. These models promise a good prediction of the device behaviour under multi-harmonic periodic continuous wave inputs. This thesis describes the capabilities of the PHD modeling framework and the theoretical type of behaviour that it is capable of predicting. Specifically, the PHD framework cannot necessarily predict the response of a broadband aperiodic signal. This analysis will be performed by deriving the PHD modeling framework as a simplification of the Volterra series kernel functions under the assumption that the power transistor is operating under continuous periodic multi-harmonic voltage and current signals in a stable circuit. A PHD model will be seen as a set of describing functions that predict the response of the Device Under Test (DUT) for any given non-linear periodic continuous-wave inputs that have a specific fundamental frequency. Two popular implementations of PHD models that can be found in the literature are the X-parameter and Cardiff models. Each model formulates the describing functions of the general PHD model differently. The mathematical formulation of the X-parameter and Cardiff models will be discussed in order to provide a theoretical ground for comparing their robustness. The X-parameter model will be seen as the first-order Taylor series approximation of the PHD model describing functions around a Large Signal Operating Point (LSOP) of the device under test. The Cardiff large-signal model uses Fourier series coefficient functions that vary with the magnitude of the large signal(s) as the PHD model describing functions. This thesis will provide a breakdown of the measurement procedure required for the extraction of these models, the challenges involved in the measurement, as well as the mathematical extraction of the model coe cients from measurement data. As each of these models contain have extended versions that enhance the predictive capability of the model under stronger nonlinear modes of operation, a comparison is used to represent the cost of increasing model accuracy as a function of the increasing model complexity for each model. The order of complexity of each model can manifest itself in terms of the mathematical formulation, the number of parameters required and the measurement time that is required to extract each model for a given DUT. This comparison will fairly assess the relative strengths and weaknesses of each model.