The Self-Assembly of Particles with Isotropic Interactions 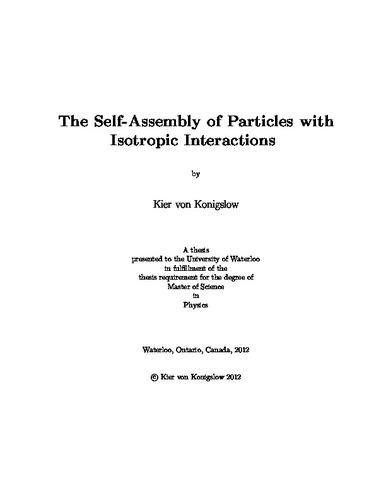 In recent years there has been much interest in the self-assembly of materials. Much of this research has been focused on the self-assembly of particles in solution (colloids), typically on the order of nanometres or micrometres in size. While it is easy to imagine the self-assembly of either irregularly shaped particles, or particles under an anisotropic potential, a novel class of colloids with engineerable isotropic interactions have achieved this aim. With the use of Self-Consistent Field Theory (SCFT), a mean-field model first developed for polymer melt systems, we develop a model for a system of particles of two species. One species experiences a long-range repulsive and short-range attractive interaction. The other is inert, acting as a solvent in which the former is suspended. Using this method, we calculated the equilibrium morphologies of the system for various parameters including the total volume fraction of one species relative to the other, the strengths and ranges of both the attractive and repulsive components of the interaction, and the relative particle sizes. In this way, we are able to loosely mimic the polymer-coated colloidal systems that are one of the current subjects of self-assembly research. By reducing our model to a simplified, isotropic interaction, we are able to show that the self-assembly of such systems is the result of the nature of the interaction and not any anisotropy within the model. We have also shown that the phase progressions of this system exhibit remarkable agreement with those of diblock copolymer melt systems despite significant differences in the molecules of these two systems.