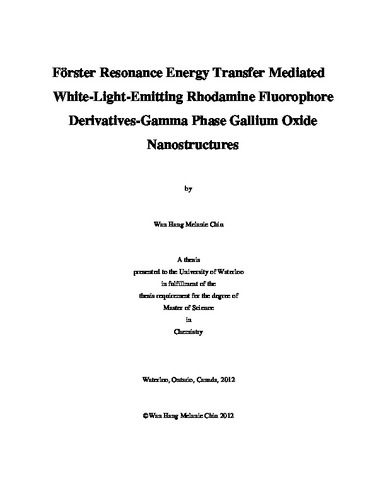 The global lighting source energy consumption accounts for about 22% of the total electricity generated. New high-efficiency solid-state light sources are needed to reduce the ever increasing demand for energy. Single-phased emitter-based composed of transparent conducting oxides (TCOs) nanocrystals and fluorescent dyes can potentially revolutionize the typical composition of phosphors, the processing technology founded on the binding of dye acceptors on the surface of nanocrystals, and the configurations of the light-emitting diodes (LEDs) and electroluminescence devices. The hybrid white-light-emitting nanomaterial is based on the expanded spectral range of the donor-acceptor pair (DAP) emission originated from the γ-gallium oxide nanocrystals via Förster resonance energy transfer (FRET) to the surface-anchored fluorescent dyes. The emission of the nanocrystals and the sensitized emission of the chromophore act in sync as an internal relaxation upon the excitation of the γ–gallium oxide nanocrystals. It extends the lifetime of the secondary fluorescent dye chromophore and the internal relaxation within this hybrid complex act as a sign for a quasi single chromophore. The model system of white-light-emitting nanostructure system developed based on this technology is the γ–gallium oxide nanocrystals-Rhodamine B lactone (RBL) hybrid complex. The sufficient energy transfer efficiency of 31.51% within this system allowed for the generation of white-light emission with the CIE coordinates of (0.3328, 0.3380) at 5483 K. The relative electronic energy differences of the individual components within the hybrid systems based on theoretical computation suggested that the luminance of the nanocomposite comprised of RBL is dominantly mediated by FRET. The production of white-light-emitting diode (WLED) based on this technology have been demonstrated by solution deposition of the hybrid nanomaterials to the commercially available ultraviolet (UV) LED due to the versatility and chemical compatibility of the developed phosphors.