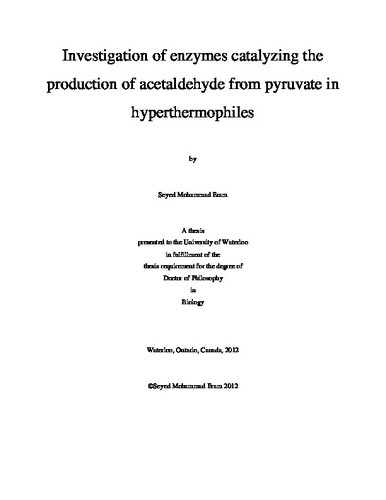 Extreme thermophiles and hyperthermophiles are microorganisms capable of growing optimally at 65-79°C and 80°C plus, respectively. Many of the enzymes isolated from them are thermostable, which makes them a potential resource for research and industrial applications. An increasing number of hyper/thermophiles is shown to be able to produce ethanol as an end-metabolite. Despite characterization of many alcohol dehydrogenases (ADHs) with a potential role in the production of ethanol, to date there has been no significant progress in identifying the enzymes responsible for the production of acetaldehyde, which is an intermediate in production of ethanol from pyruvate.<br> Pyruvate decarboxylase (PDC encoded by pdc) is a thiamine pyrophosphate (TPP)-containing enzyme responsible for conversion of pyruvate to acetaldehyde in many mesophilic organisms. However, no pdc/PDC homolog has yet been found in fully sequenced genomes of hyper/thermophiles. The only PDC activity reported in hyperthermophiles is a bifunctional, TPP- and CoA-dependent pyruvate ferredoxin oxidoreductase (POR)/PDC enzyme from the hyperthermophilic archaeon Pyrococcus furiosus.<br> The bifunctional and TPP-containing POR/PDC enzyme was isolated and characterized from the ethanol-producing hyperthermophilic archaeon Thermococcus guaymasensis (Topt=88°C), as well as the bacteria Thermotoga hypogea (Topt=70°C) and Thermotoga maritima (Topt=80°C). The T. guaymasensis enzyme was purified anaerobically to homogeneity as judged by SDS-PAGE analysis. POR and PDC activities were co-eluted from each of the chromatographic columns, and the ratio of POR to PDC activities remained constant throughout the purification steps. All of the enzyme activities were CoA- and TPP-dependent and highly sensitive toward exposure to air. The apparent kinetic parameters were determined for the main substrates, including pyruvate and CoA for each activity. Since the genome sequence of T. guaymasensis and T. hypogea were not available, sequences of the genes encoding POR were determined via primer walking and inverse PCR.<br> A novel enzyme capable of catalyzing the production of acetaldehyde from pyruvate in hyperthermophiles was also characterized. The enzyme contained TPP and flavin and was expressed as recombinant histidine-tagged protein in the mesophilic host Escherichia coli. The new enzyme was a bifunctional enzyme catalyzing another reaction as the major reaction besides catalyzing the non-oxidative decarboxylation of pyruvate to acetaldehyde.<br> Another enzyme known to be involved in catalysis of acetaldehyde production from pyruvate is CoA-acetylating acetaldehyde dehydrogenase (AcDH encoded by mhpF and adhE). Pyruvate is oxidized into acetyl-CoA by either POR or pyruvate formate lyase (PFL), and AcDH catalyzes the reduction of acetyl-CoA to acetaldehyde. AcDH is present in some mesophilic (such as clostridia) and thermophilic bacteria (e.g. Geobacillus and Thermoanaerobacter). However, no AcDH gene or protein homologs could be found in the released genomes of hyperthermophiles. Moreover, no such activity was detectable from the cell-free extracts of different hyperthermophiles used in this study.<br> In conclusion, no commonly-known PDCs was found in hyperthermophiles, but two types of acetaldehyde-producing enzymes were present in various bacterial and archaeal hyperthermophiles. Although the deduced amino acid sequences from different hyperthermophiles are quite similar, the levels of POR and PDC activities appeared to vary significantly between the archaeal and bacterial enzymes, which most likely reflects the different physiological implications of each activity.