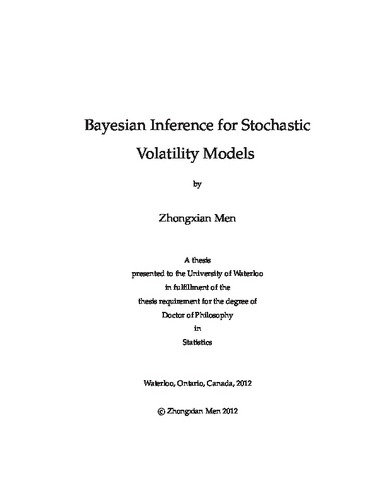 Stochastic volatility (SV) models provide a natural framework for a representation of time series for financial asset returns. As a result, they have become increasingly popular in the finance literature, although they have also been applied in other fields such as signal processing, telecommunications, engineering, biology, and other areas. In working with the SV models, an important issue arises as how to estimate their parameters efficiently and to assess how well they fit real data. In the literature, commonly used estimation methods for the SV models include general methods of moments, simulated maximum likelihood methods, quasi Maximum likelihood method, and Markov Chain Monte Carlo (MCMC) methods. Among these approaches, MCMC methods are most flexible in dealing with complicated structure of the models. However, due to the difficulty in the selection of the proposal distribution for Metropolis-Hastings methods, in general they are not easy to implement and in some cases we may also encounter convergence problems in the implementation stage. In the light of these concerns, we propose in this thesis new estimation methods for univariate and multivariate SV models. In the simulation of latent states of the heavy-tailed SV models, we recommend the slice sampler algorithm as the main tool to sample the proposal distribution when the Metropolis-Hastings method is applied. For the SV models without heavy tails, a simple Metropolis-Hastings method is developed for simulating the latent states. Since the slice sampler can adapt to the analytical structure of the underlying density, it is more efficient. A sample point can be obtained from the target distribution with a few iterations of the sampler, whereas in the original Metropolis-Hastings method many sampled values often need to be discarded. In the analysis of multivariate time series, multivariate SV models with more general specifications have been proposed to capture the correlations between the innovations of the asset returns and those of the latent volatility processes. Due to some restrictions on the variance-covariance matrix of the innovation vectors, the estimation of the multivariate SV (MSV) model is challenging. To tackle this issue, for a very general setting of a MSV model we propose a straightforward MCMC method in which a Metropolis-Hastings method is employed to sample the constrained variance-covariance matrix, where the proposal distribution is an inverse Wishart distribution. Again, the log volatilities of the asset returns can then be simulated via a single-move slice sampler. Recently, factor SV models have been proposed to extract hidden market changes. Geweke and Zhou (1996) propose a factor SV model based on factor analysis to measure pricing errors in the context of the arbitrage pricing theory by letting the factors follow the univariate standard normal distribution. Some modification of this model have been proposed, among others, by Pitt and Shephard (1999a) and Jacquier et al. (1999). The main feature of the factor SV models is that the factors follow a univariate SV process, where the loading matrix is a lower triangular matrix with unit entries on the main diagonal. Although the factor SV models have been successful in practice, it has been recognized that the order of the component may affect the sample likelihood and the selection of the factors. Therefore, in applications, the component order has to be considered carefully. For instance, the factor SV model should be fitted to several permutated data to check whether the ordering affects the estimation results. In the thesis, a new factor SV model is proposed. Instead of setting the loading matrix to be lower triangular, we set it to be column-orthogonal and assume that each column has unit length. Our method removes the permutation problem, since when the order is changed then the model does not need to be refitted. Since a strong assumption is imposed on the loading matrix, the estimation seems even harder than the previous factor models. For example, we have to sample columns of the loading matrix while keeping them to be orthonormal. To tackle this issue, we use the Metropolis-Hastings method to sample the loading matrix one column at a time, while the orthonormality between the columns is maintained using the technique proposed by Hoff (2007). A von Mises-Fisher distribution is sampled and the generated vector is accepted through the Metropolis-Hastings algorithm. Simulation studies and applications to real data are conducted to examine our inference methods and test the fit of our model. Empirical evidence illustrates that our slice sampler within MCMC methods works well in terms of parameter estimation and volatility forecast. Examples using financial asset return data are provided to demonstrate that the proposed factor SV model is able to characterize the hidden market factors that mainly govern the financial time series. The Kolmogorov-Smirnov tests conducted on the estimated models indicate that the models do a reasonable job in terms of describing real data.