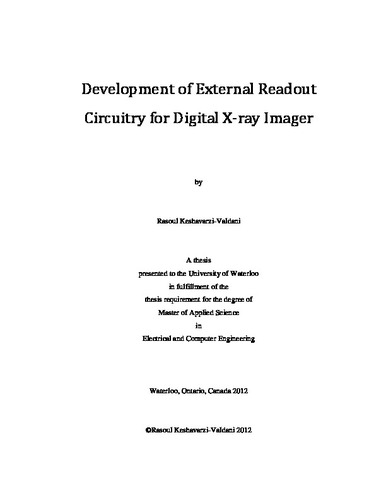 X-ray detectors are structurally very similar to visible light detectors. They transform the high energy photons in X-ray beam into an electrical signal, either a voltage or current, that is detected by means of an electronic circuit. Single pixel X-ray detectors are put together in a 2D layout to construct a panel of X-ray detectors. Once an X-ray panel detector is exposed to X-ray beam passing through the object under study, an image is formed on the panel. In this work an interface is designed, built, and tested that reads out the pattern generated by a 32x32 flat panel X-ray detector. There are two main sections in any X-ray panel detector, Gate Drivers and Charge Amplifiers. In order to minimize the size of the circuit, which can be very large if discrete components are used for both sections, an application specific integrated circuit (ASIC) designed for X-ray panel detection purposes is employed. The AISC, Gate Drivers, and other necessary electronic components are mounted on a main-board that hosts the X-ray panel detector as well. A field gate programmable array (FPGA) connects the main-board and a personal computer (PC), and has been programmed to serve multiple purposes; it generates the pulses required to drive the X-ray pixel sensors on the panel, receives the fast stream of data coming from the ASIC, and transfers the information to the PC using RS-232 protocol. A program running on the PC receives the data sent by FPGA over the serial cable, and puts them together to regenerate the image captured by the X-ray panel detector on the monitor of the computer. In order to test the functionality of the overall system, a 32x32 passive pixel sensor (PPS) with lateral amorphous Selenium metal-semiconductor-metal (MSM) structure was used. The array has been tested under blue light which is the closest visible light to X-ray spectrum, and some captured images are presented. Several techniques for creating better quality images with less noise are also discussed.